Dramatic Rescue Of 4 American Explorers Stuck In A Cave, 53 Years Ago 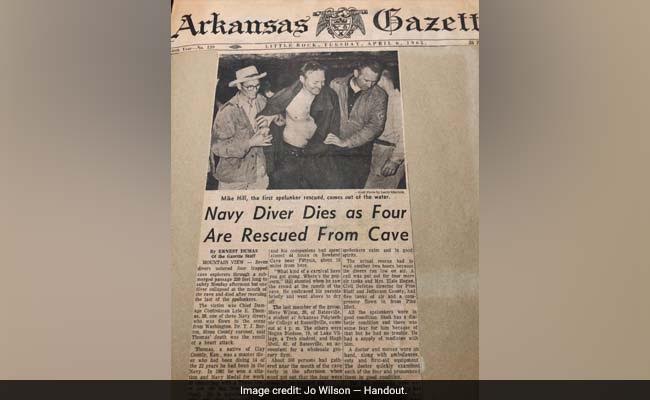 Steve Wilson had watched his three buddies each put on a wetsuit top, a mask and flippers and then disappear into the water inside a cave in rural Arkansas.

Now it was his turn - and he was nervous. None of them had any experience scuba diving, but they had been given a five-minute crash course that afternoon in 1965 and told it was the only way to escape from the cave, which had flooded during a rainstorm, trapping them inside. So Wilson, then 20, dove in, with one Navy diver in front of him and another behind him, feeling his way along a rope underneath the pitch-black water.

"I was on the verge of panic the entire time," Wilson told The Washington Post, saying the 30-minute trip seemed like it took hours. He could barely see the diver leading the way and he was concerned about trying to breathe normally under the water. "I didn't want to mess up and cause harm to myself or cause them any more problems."

Now more than five decades later, Wilson said he can sympathize with the young soccer players and their coach trapped in a cave in Thailand for days. Eight of the 12 boys have been rescued; the other four and their coach are expected to be saved Tuesday, after spending 17 nights trapped in the cave.

"I don't think they can overemphasize the danger those guys are in," said Wilson, now 74, adding that there's no doubt the boys are "distressed."

Wilson, a retired director of the Arkansas Game & Fish Commission who lives in Norfork, Arkansas, recalled his own experience when he was trapped in April 1965.

He said that he and three friends - all experienced cave explorers - went on "a weekend adventure," tracing a stream from Arkansas's Rowland Cave to Blanchard Springs Caverns in the Ozarks.

Wilson, then a wildlife management major at Arkansas Tech University, set out with the other spelunkers, who ranged in age from 19 to 42, on a Friday afternoon with baloney sandwiches, water and other supplies, including lights and an inflatable raft. They started in Rowland Cave, a known tourist spot, following the stream toward the caverns, which had not yet been developed by the U.S. Forest Service, he said.

They waded through the water - sometimes ankle-deep, other times up to their waists - unaware that it was pouring down rain outside the cave, he said.

On Saturday, they ran into a rock pile that cut off their path to the caverns and they had no time to search for another way through, so they turned around.

By Sunday, they had reached the mouth of the cave where they had entered - but the water was high and they had no equipment to help them swim out. So the men - cold, wet and tired - pitched a tent - a crude structure built from their rubber raft and some ponchos they had packed to keep themselves dry. Their plan was to burn candles, dry out, warm up and wait for the water to recede.

But they had no idea how long it would take - and whether they could make it that long.

The men still had water to drink but had very little food left to eat; they assumed they could make it days, maybe weeks, but their leader was diabetic, so medication was also a concern, Wilson said. Plus, he said, the cave was damp and cold, averaging about 56 degrees inside, so they worried about getting sick. Death, however, was not a consideration for the young and adventurous crew.

The four started a rotation - three of them would sleep and one would stay up and watch the water level to determine whether it was starting to recede.

"It was just a matter of waiting," Wilson said.

He said that he and the others were also "trying to imagine what was happening outside in the rest of the world - whether anybody was looking for us."

Wilson said another friend and veteran cave explorer who was not able to accompany them that weekend knew where the men had gone and knew the cave would likely be flooded from the rain, so he reported the situation to authorities. Local volunteers tried to rescue them, then divers from the U.S. Navy and the National Speleological Society came to help, according to news reports from that time.

Back home in Morrilton, Arkansas, a small town about 100 miles southwest of the caves, Wilson's wife, Jo, had learned her husband was trapped by floodwaters.

The newlyweds could not afford a phone, so word had been sent to a neighbor, who told Jo that something was wrong. Jo, a 21-year-old schoolteacher, rushed down to the phone company to use a pay phone to call for details about her husband. Then she made the long drive toward the caves with "all sorts of things running through my head," she said.

When she got there, she said, she joined Wilson's parents, who were surrounded by other families, friends and reporters - all waiting for the men to emerge.

According to an April 5, 1965, article from United Press International: "Members of the Navy Deep Sea Diving School and the National Capitol cave rescue team both in Washington, arrived early today at the site of the remote cave in the foothills of the mist-shrouded Ozark Mountains. They immediately began a search for the spelunkers." It added that the men included "two seasoned cave explorers, one of them Hugh Shell who has diabetes. Shell, 42, a bookkeeper from Batesville, Ark., was said to have a three-day supply of medicine with him. The other three, all college students, were identified as Mike Hill, 19, a student at Arkansas College, and Steve Wilson, 20, a student at Arkansas Tech in Russellville."

Wilson said he was on watch that Monday when he heard a loud noise, which turned out to be a diver entering the cave. He said the diver handed him a rope and told him to secure it. The men, with help from the divers, would use it to find their way out of the cave.

"I was relieved," he said. "I woke my buddies up and told them what happened, that it looked like divers would rescue us. Everybody was elated to know that we were finally going to be rescued."

Wilson said it took about an hour per person - each time, one of his buddies would suit up, then, with a diver in front and one behind, would inch along the rope under the water until he made it to land.

Wilson was the last one to be rescued - he said that the divers told him that since he was the smallest, he would not need his buddies to help him put on the gear.

As he reached land, he said, his wife and his parents rushed toward him, telling him how glad they were that he made it out. It was a joyous moment soon to be marred - the diver who had been swimming behind Wilson collapsed on the bank and died. The coroner later determined that the diver, identified in news reports as 39-year-old Lyle E. Thomas, suffered a heart attack, Wilson said.

The former Arkansas Gazette describe Thomas as a "master diver who had been diving 14 of the 22 years he had been in the Navy."

"I was totally shocked, and the fact that somebody would end up giving their life to save ours was an awful feeling," Wilson said, remembering the tragedy.

Speaking about the incident in Thailand, Wilson said that he thinks the rescuers have been doing a "spectacular" job, rescuing some children and teenagers who are not even swimmers, much less divers.

And, he said, he aches for those still trapped inside.

Wilson said he would tell the children to "persevere," "pay attention" and to listen to the first responders trying to save their lives.

(Except for the headline, this story has not been edited by NDTV staff and is published from a syndicated feed.)
Comments
Cave rescueBoys Stuck In CaveAmerican Cave Rescue