In the video, the record-producer said, "It's the 'most amazing toilet bowl' he's ever seen. 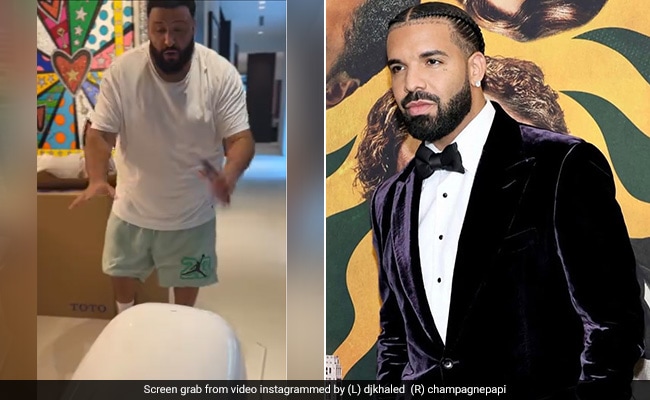 Canadian rapper Drake gifted an unusual yet luxurious present to his pal DJ Khaled on his birthday. The rapper gifted him four high-end toilets which were on DJ Khaled's home improvement wish list. The American DJ who turned 47 on Saturday, shared the news on his Instagram handle and showed off one of the four TOTO toilet bowls he received from Drake.

Along with the video, the singer wrote, "Real talk: My queen and I have been wanting this for our house! Thank you, my brother!" He added, "Nahhhh, this is no regular toilet. This that TOTO! Same model as the ones in the embassy."

"Same model as the ones in the embassy I LIKE WHAT DRAKE LIKE!! Love brother!! Thank you for the gift," he wrote in the caption.

According to Rap-Up, the TOTO Neorest Dual-Flush Elongated One-Piece Toilet with High-Efficiency Flush features UV light, UV cleaning system, and remote control on top of a heated seat, dual flush, various wash modes, and sensors that make every trip to the comfort room a breeze. The singer also expressed his gratitude for the generous gifts.

"It's not about the money, it's about him getting the best. He gave me a piece of Toto's toilet bowl as a gift." Adding to the fact that he had his eye on it, DJ Khaled shared, "This might be the best gift ever. Everybody knows, when you sit down and do the theory," he said while simulating a wiping motion, "that's when you meditate and reflect on life! When you sit down and do the theory, ideas be coming. Some of my best ideas come from my taking a theory. Real talk! And I got one now that lights up and it sprays theory and it even makes it smell theory. And it's like a big theory."

Meanwhile, DJ Khaled is giving two lucky fans the chance to stay in a decked-out Airbnb stay that includes a replica of his own sneaker closet.

The hip-hop mogul is inviting fans to cop an exclusive stay inside a recreation of his legendary sneaker closet in Miami, bookable on Airbnb. Sneakerheads, fans, and people looking for a sunny escape can reserve two one-night stays, occurring on December 5 and 6, for two guests each at only $11 (Rs 900) per night.