Dozens Of Children Freed After New Abduction In Nigeria: Police

Gunmen had abducted about 80 children on Saturday as they returned to Mahuta village after having attended a religious ceremony, said police spokesman Gambo Isah, of Katsina state police. 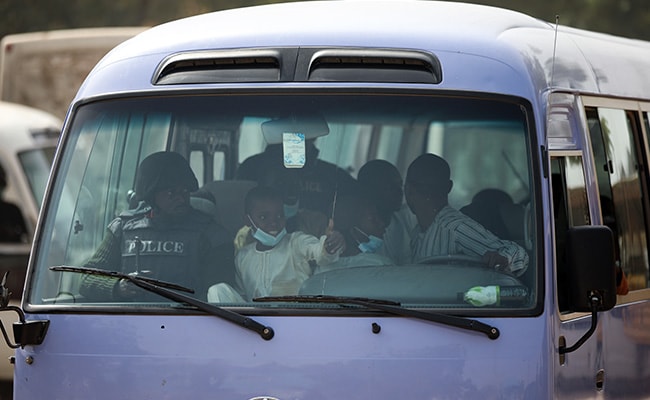 One of freed schoolboys' gestures in a bus as he prepares to meet his parents on December 18, 2020.

Local vigilantes rescued dozens of schoolchildren abducted by bandits in the northern Nigerian state of Katsina after a gun battle, police said Sunday.

Gunmen had abducted about 80 children on Saturday as they returned to Mahuta village after having attended a religious ceremony, said police spokesman Gambo Isah, of Katsina state police.

The incident came barely 48 hours after the release of 344 schoolboys kidnapped from a boarding school by bandits and held for six days.

According to local people, the number of children rescued following Saturday's attack came to 113.

When the news spread across Mahuta, residents and vigilantes mobilised and went after the kidnappers, said Abdullahi Sada leader of a local vigilante group.

They set off in pursuit of the gunmen, who had been identified as Fulani herders.

"We laid siege on the area we knew they were holding the children and also took some Fulani settlements in the area hostage, warning that if anything happened to our children no Fulani would live in the area henceforth," said Sada.

"They released 60 children around 3:00 am and this morning they called and said they had released the remaining 53 who are now being ferried from the bush," he said.

The children, from various Islamic seminaries in the town, had been travelling in the company of their teachers when they were kidnapped, said one of the teachers who gave his first name Tijjani.

The Fight For Abortion Rights "Isn't Over" In US, Says Joe Biden