"We Love America": Trump's Undocumented Ex-Workers Seek Meeting With Him

Over the past year, dozens of people who worked for the Trump Organization without legal documents have spoken publicly about their employment with the president's company. 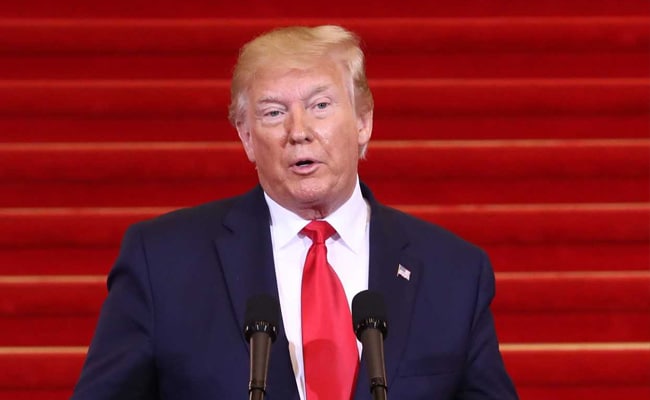 Donald Trump has made blocking illegal immigration central to his presidency.

More than 20 undocumented workers previously employed by President Donald Trump's company have requested a meeting with their former boss to discuss how to update the country's immigration system and to ask for protection from deportation.

The Wednesday letter to the White House - from former groundskeepers, maids and kitchen staffers at the Trump Organization's golf courses - also asks the president to recall their years of service and "do the right thing" for them and others who are in the country unlawfully.

"We are modest people who represent the dreams of the 11 million undocumented men, women and children who live and work in this country," the group wrote in the letter, signed by 21 people and obtained by The Washington Post. "We love America and want to talk to you about helping to give us a chance to become legal."

Over the past year, dozens of people who worked for the Trump Organization without legal documents have spoken publicly about their employment with the president's company.

Many said they were motivated to come forward because of Trump's rhetoric about migrants from Mexico and Central America. Some have said their Trump Organization supervisors knew about their immigration status but hired them anyway.

Trump Organization officials have said that these workers used fake documents to get their jobs and that the company fired them once they found out.

In recent months, The Post has detailed the Trump Organization's reliance on undocumented labor over many years. Immigrant labor helped build some of his golf courses and staffed jobs in housekeeping, maintenance and food preparation well into Trump's presidency. The Post has interviewed 40 people who worked for Trump without legal status.

Since going public, these former workers have visited Congress, protested outside Trump rallies and called on federal and state authorities to investigate the company's hiring and payment practices.

Trump has made blocking illegal immigration central to his presidency. But he has largely avoided discussing his own company's record of hiring undocumented workers.

This year, after revelations that the Trump Organization was relying on undocumented labor, the company fired at least 20 workers at golf courses in New York and New Jersey. The Trump Organization also adopted E-Verify, the government's voluntary online system for checking whether an employee is eligible to work in the United States.

The New York Attorney General's Office has been looking into allegations of wage theft by the Trump Organization at the company's golf courses in Westchester and Dutchess counties. The company has denied the allegations.

In the White House letter, the former employees stressed their many years of close personal service to the Trump family. Among those who signed the letter were maids at the Trump golf course in Bedminster, New Jersey, who cleaned Trump's clothes and made his bed. Others worked personally for the president's sons at their homes and a New York hunting lodge.

"You know many of us and will recall how hard we worked for you, your family and your golf clubs," the undocumented workers wrote to Trump. ". . .You know we are hard workers and that we are not criminals or seeking a free ride in America.

"We all pay our taxes, love our faith and our family, and simply want to find a place for ourselves to make America even better," the letter added. ". . . We believe you have a heart and will do the right thing to find a home for us here in America so that we can step out of the shadows and not deport us and our friends and family."

Jose Gabriel Juarez, who spent a decade as a waiter at the Trump National Golf Club Westchester, said in an interview that he signed the letter because he wanted Trump to acknowledge the service of so many people who are still living precariously in the United States. Juarez said he tries to wake up each day with "happiness and faith, but you always think about the possibility of deportation."

If Trump accepted the invitation for a meeting, Juarez said he would express his gratitude to the president.

"I would say, 'Thank you very much for having given me work for 10 years in one of the most beautiful golf clubs in Westchester, New York,' " he said. "And I would ask him for the opportunity to be here legally in this country."