The Game of Thrones-inspired poster had the warning "Sanctions Are Coming" - a spoof of the Stark family's iconic phrase "Winter Is Coming." 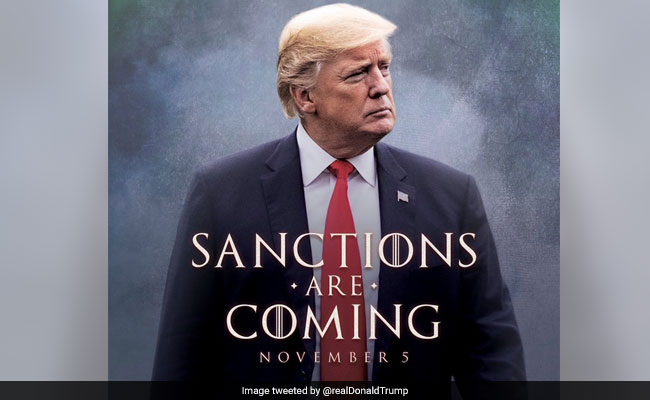 There lies a 'Game of Thrones' fan in United States President Donald Trump, and the appearance of his poster inspired by the series is testament to the same.

During a cabinet meeting on Wednesday, Mr Trump sent a vague message to the world as he brought along a special GoT poster featuring an image of him staring dramatically into the dark. The poster had the warning "Sanctions Are Coming" - a spoof of the Stark family's iconic phrase "Winter Is Coming."

During the meeting, Mr Trump said the sanctions have worked with regards to Iran, but made no mention of North Korea, CNN reported.

The giant poster was first seen on Mr Trump's Twitter account on November 2, as the Trump administration prepared to announce new sanctions from the "Westeros Wing" on Iran, completing the removal of the US from the 2015 nuclear deal.

Not so pleased by Donald Trump's gesture, HBO mocked him by writing, "How do you say trademark misuse in Dothraki?" on Twitter.