At least 18 undocumented workers have been fired from Donald Trump's five golf courses in New York and New Jersey in the past two months. 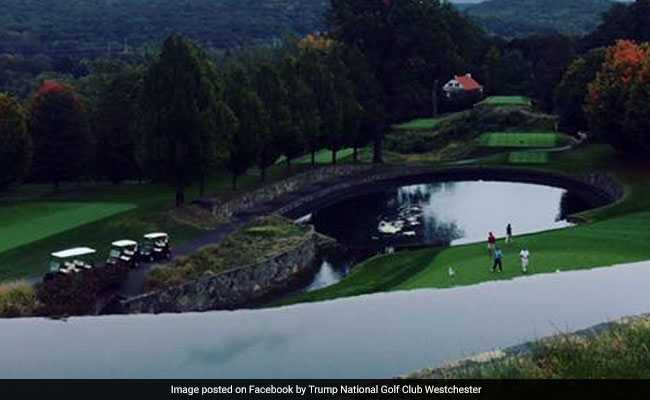 A photo of US President Donald Trump's golf club in New York.

President Donald Trump's company has fired at least 18 undocumented workers from five golf courses in New York and New Jersey in the past two months, part of a purge set in motion after a series of reports about the clubs' employment of workers without legal status.

The Washington Post could not independently verify Trump's figures. There have also been firings at the Trump course in Bedminster, New Jersey, which Eric Trump did not address.

The Post previously reported a purge of about a dozen undocumented workers at Trump's club in Westchester, representing half the club's winter staff. Eric Trump on Monday put the number fired at 11.

It was unclear how seasonal employees expected to return to the clubs for the spring or summer would be affected.

The wave of dismissals raise questions about how widely the president's company has relied on undocumented workers, even as he has denounced illegal immigration in fiery terms and demanded the construction of a wall along the U.S.-Mexico border.

Trump has suggested if Congress does not give him money for a border wall he may declare a national emergency. He said Friday, "I think there's a good chance we'll have to do that."

The firings were a result of an internal audit by the Trump Organization after a New York Times article in December identified undocumented housekeepers at the Trump golf course in Bedminster.

"We are making a broad effort to identify any employee who has given false and fraudulent documents to unlawfully gain employment," Eric Trump said in a statement last month. "Where identified, any individual will be terminated immediately."

Juan Quintero, an undocumented immigrant from Mexico who has worked at the club now known as Trump Hudson Valley for about 18 years, said he was among those fired.

Quintero, 42, said he was a teenager when he left his hometown of Valle de Chalco, outside Mexico City, and slipped across the border to seek his fortune in the United States.

He eventually found steady work mowing fairways and tending greens at the course, he said, and raised four children in the United States.

Last month, a Trump Organization executive told him he could no longer work there, Quintero said.

Former employees say the number of undocumented workers employed at these courses is likely larger than the firings reflect, because labor is seasonal at many golf courses. Maintenance and other employees often leave their jobs in late fall and return when courses reopen in the spring, leaving only a fraction of employees to work through the winter.

Some seasonal employees contacted by The Washington Post who weren't technically fired said they expected they would not be rehired in the spring.

The fired employees interviewed by The Post were from Latin America. They worked in food service, maintenance, housekeeping and other jobs at the golf courses. Many said they had held these jobs for years and that the Trump Organization previously had paid little attention to their immigration status.

The workers interviewed said they got their jobs by presenting false Social Security and green cards. Many said their supervisors were aware the documents were fraudulent.

Quintero said he was warned by a supervisor that news of undocumented workers at Trump properties might mean trouble for him.

"He said, 'Right now, there's a big problem,' " Quintero recalled. "He told me to look for another job."

Weeks later, Quintero said, he met with the Trump Organization official who told him he was fired.

On Jan. 18, a Trump Organization human resources executive visited the Trump golf club in Westchester County, New York, and summoned about a dozen workers, one by one, into meetings, in a wave of firings first reported by The Post. The executive told them an audit had revealed their documents were not genuine and that they should leave the premises.

The Trump Organization said last week it would start using the E-Verify electronic system to check the immigration status of all of its employees. The system allows employers to check the documents that employees provide against U.S. government records.

Four of the workers from the Bedminster and Westchester courses visited Capitol Hill last week to meet with lawmakers.

Among those they visited was Sen. Robert Menendez, D-N.J., who called on federal authorities Monday to open an investigation into the Trump Organization's golf clubs.

In a letter to FBI Director Christopher Wray and Homeland Security Secretary Kirstjen Nielsen, Menendez said officials should "conduct an appropriate investigation" into the concerns raised by the four ex-employees. He requested that the FBI and Homeland Security Investigations, a division of Immigration and Customs Enforcement, undertake the probe.

"The workers I met with describe a hostile environment where they were verbally abused and threatened," he wrote. "Given the serious nature of these allegations, I request that the FBI/HSI immediately open an investigation regarding the Trump National Golf Clubs."

Menendez also asked that members of the group who remain undocumented be protected from deportation during a possible investigation.

Victorina Morales and Sandra Diaz, two of the workers who met with lawmakers, will attend Tuesday's State of the Union address.