Nearly two weeks after Hurricane Maria thrashed through the verdant island, residents are still short of food and largely without access to power or portable water. 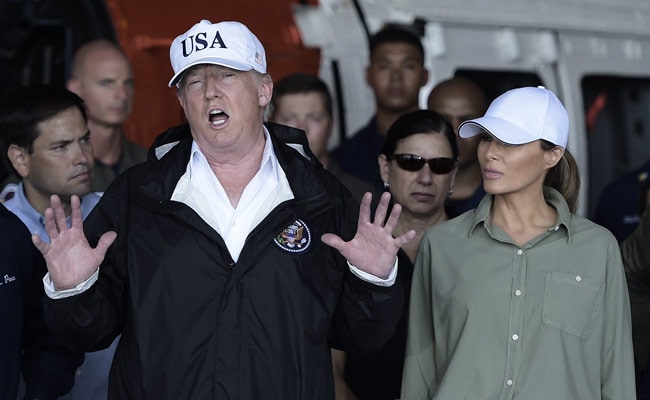 Nearly two weeks after Hurricane Maria thrashed through the verdant island, residents are still short of food and largely without access to power or portable water.

Trump's wants to show that the federal government is on top of the daunting recovery effort, and that 3.4 million US citizens are not forgotten.

The administration's critics said the early response was not fast enough or large enough, prompting the pugilistic president to punch back.

He berated San Juan's mayor -- who was frequently on TV asking for help -- and suggested Puerto Ricans were "ingrates" who "want everything to be done for them."

Trump went on to accuse the media of lying about the "great job" he was doing, in a series of excoriating weekend tweets.

"We have done a great job with the almost impossible situation in Puerto Rico. Outside of the Fake News or politically motivated ingrates... people are now starting to recognize the amazing work that has been done," he wrote.

The White House fired out a series of compliments about the relief effort from political allies to try and drive home the point.

It took the unusual step of citing a gushing call between Trump and former Puerto Rican governor Luis Fortuno, who now lives in Washington and works as a lobbyist.

Luckily for the White House, few Puerto Ricans had time or -- quite literally the energy --  to read or hear of the president's barbed remarks.

But Trump's visit will be carefully choreographed to avoid any embarrassing protests.

After an early departure from Washington, Trump is expected to land at Muniz Air National Guard Base near the capital San Juan.

During roughly five hours on ground he and first lady Melania Trump will meet first responders, officials from the Federal Emergency Management Agency (FEMA) as well as survivors.

He is also expected to meet the governor of the US Virgin Islands, which were also thumped by Maria, but are not quite ready for the massive footprint of a presidential visit.

But his trip to Puerto Rico, normally a fairly routine show of presidential empathy, has taken on outsized political meaning.

"It's been amazing what's been done in a very short period of time on Puerto Rico," Trump said defending the response.

"There's never been a piece of land that we've known that was so devastated," he claimed.

"The bridges are down, the telecommunications was nonexistent, and it's in very, very bad shape. The electrical grid, as you know, was totally destroyed."

Puerto Rico is a US territory. Though Puerto Ricans are US citizens with US passports, they can only vote in presidential primaries.

Promoted
Listen to the latest songs, only on JioSaavn.com
If they live on the island, they cannot vote in US presidential elections. If they are living on the mainland, they can register to vote including for president, in whichever state they live.