In a telephone conversation, Donald Trump and Recep Tayyip Erdogan "discussed the idea of creating a security zone cleared of terrorism in the north of the country," the Turkish presidency said in a statement. 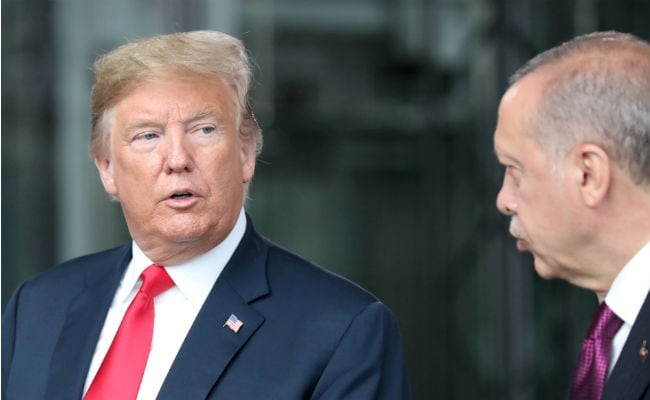 Donald Trump earlier warned the US would "devastate Turkey economically if they hit Kurds". (Reuters)

Turkey's President Recep Tayyip Erdogan and US counterpart Donald Trump mooted Monday the creation of a "security zone" in northern Syria as tensions rose over the fate of Kurdish fighters in the war-torn country.

In a telephone conversation, the leaders "discussed the idea of creating a security zone cleared of terrorism in the north of the country," the Turkish presidency said in a statement.

Trump confirmed this in a tweet later, but referred to the proposed area as a "safe zone."

This came after Turkey vowed it "will not be intimidated" by Trump's threats of economic devastation if Ankara attacked Kurdish forces as US troops withdraw from Syria.

Trump on Sunday warned the US would "devastate Turkey economically if they hit Kurds".

Ankara has repeatedly threatened to carry out a cross-border operation against the Kurdish People's Protection Units (YPG), which have been working closely with the United States in the war on ISIS terrorists.

US support for the YPG has been a major source of friction between the NATO allies.

The White House said in a statement that Trump had warned Erdogan against harming Kurdish military units.

"The president expressed the desire to work together to address Turkey's security concerns in northeast Syria while stressing the importance to the United States that Turkey does not mistreat the Kurds and other Syrian democratic forces with whom we have fought to defeat ISIS," White House spokeswoman Sarah Sanders said.

But in his subsequent tweet, Trump put a more positive spin, noting that he and Erdogan "also spoke about economic development between the U.S. & Turkey -- great potential to substantially expand!"

The strained relationship between Ankara and Washington initially seemed to improve after Trump announced last month that 2,000 US troops would withdraw from Syria.

Ankara welcomed the decision and Erdogan told Trump that Turkey could finish off the last remnants of ISIS.

Trump has been pushing for the creation of a 30-kilometre (20-mile) "safe zone" in Syria.

US Secretary of State Mike Pompeo said Monday talks were under way on Washington's proposal to establish the zone in flashpoint border areas of northeast Syria.

"We want to make sure that the folks who fought with us to down the (ISIS) have security... and also that terrorists acting out of Syria aren't able to attack Turkey," Pompeo said on a visit to Riyadh.

Turkish Foreign Minister Mevlut Cavusoglu said earlier that Turkey was "not against" a "security zone" in Syria.

And in their conversation Monday, Erdogan assured Trump that Turkey was ready to provide "any kind of support" to the United States in its withdrawal from Syria.

Turkey views the YPG as a "terrorist offshoot" of the outlawed Kurdistan Workers' Party (PKK), which has been waging an insurgency against the Turkish state since 1984.

The PKK is blacklisted as a terrorist organisation by Ankara, the United States, and the European Union.

Erdogan's spokesman Ibrahim Kalin said Ankara would "continue to fight against them all", referring to ISIS and the YPG.

There has been growing tension between Turkey and the US over the fate of the YPG, especially after Pompeo this month said Washington would ensure Turkey does not "slaughter" Kurds.

And before a visit to Ankara last week, White House National Security Advisor John Bolton said the US retreat was conditional on the safety of Kurdish fighters, provoking angry retorts from Turkish officials.

Turkey previously launched military offensives in northern Syria in 2016 and 2018 respectively against ISIS and the YPG. In early 2018, Syrian rebels backed by Turkish military forces captured the YPG's northwestern enclave of Afrin.

Ankara, which supports Syrian opposition fighters, is also involved in the last rebel bastion of Idlib, where Turkey has agreed a buffer zone deal with Damascus ally Russia.

But the deal has not stopped an assault by terrorists in Syria.

Syria's National Coalition, the leading opposition body, on Sunday called for a "radical solution" to put "an end to its (HTS) presence" in Idlib.

Cavusoglu however said the Idlib deal was being "successfully applied" and that statements that HTS took 50 percent of Idlib are "not true".