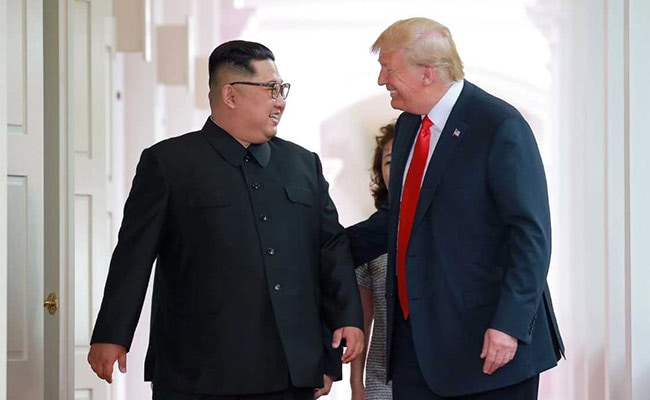 President Donald Trump cited an "unusual and extraordinary threat" to U.S. national security as he acted Friday to maintain long-standing economic restrictions on North Korea, including the freezing of any assets in the United States.

The official declaration, contained in a notice to Congress, came despite Trump's assertion earlier this month that his historic summit with North Korean leader Kim Jong Un ended the North's nuclear weapons threat.

"Sleep well tonight!" Trump tweeted on June 13, the day after he and Kim met in Singapore.

Harsh economic restrictions will continue for one year under the order Trump signed Friday. The paperwork keeps in place restrictions first imposed a decade ago by President George W. Bush. The ban on transfer of any U.S. assets by North Korea's leaders or its ruling party has been extended or expanded several times by both President Barack Obama and Trump himself, in response to North Korean missile tests and other actions.

"The existence and risk of proliferation of weapons-usable fissile material on the Korean Peninsula and the actions and policies of the Government of North Korea continue to pose an unusual and extraordinary threat to the national security, foreign policy, and economy of the United States," Trump wrote Friday.

The action was pro forma, but notable for the stern tone and list of accusations against North Korea just 10 days after the warm meeting between Trump and Kim. Trump said afterward that he believes Kim is serious about giving up nuclear weapons and transforming his stunted economy.

"Just landed - a long trip, but everybody can now feel much safer than the day I took office," Trump wrote on Twitter on June 13. "There is no longer a Nuclear Threat from North Korea."

"Before taking office people were assuming that we were going to War with North Korea," he added. "President Obama said that North Korea was our biggest and most dangerous problem. No longer - sleep well tonight!"

The confident, optimistic language marked a complete reversal from Trump's criticism of Kim as "little Rocket Man" and his threats last year to deliver "fire and fury" to North Korea if necessary. The insults and nuclear brinkmanship alarmed other world leaders, who feared war and a new nuclear arms race.

"It is North Korea - through its nuclear and missile programs, aggressive behavior and egregious human rights violations - that poses the greatest threat to peace," McCain said in a statement. "And until North Korea takes concrete steps to change that, no concessions should be made and the sanctions must continue."

On Friday, the Pentagon said the United States and South Korea have agreed to indefinitely suspend two Korean Marine Exchange Program training exercises. Spokeswoman Dana White said these would be in addition to the Freedom Guardian exercise scheduled for August that was suspended earlier this week.

The national emergency that Trump extended allows the government to forbid North Korean leaders from selling or otherwise using any assets they may hold in the United States. It is separate from U.S. sanctions related to North Korean human rights abuses and a long list of international penalties imposed over Pyongyang's nuclear and ballistic missile testing.

Trump and Secretary of State Mike Pompeo have said that all U.S. sanctions will remain in force for now. Some could be lifted as negotiations progress.

Promoted
Listen to the latest songs, only on JioSaavn.com
North Korean state media have described a step-by-step diplomatic process and said Trump agreed to "lift sanctions" as relations improve.