Donald Trump, speaking on the last day of the G7 in Biarritz, France, said the Doral resort near Miami was an ideal location for the annual gathering of the world's richest democracies. 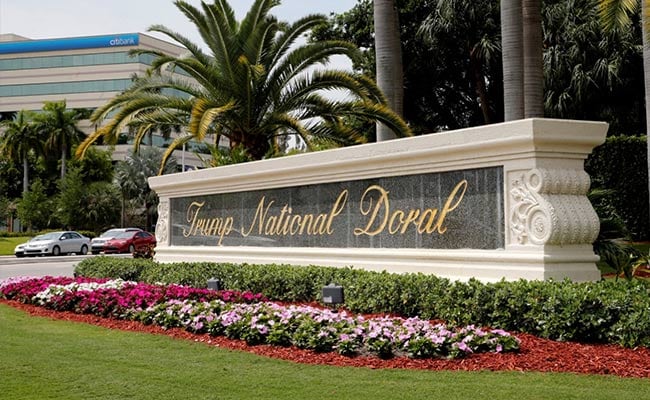 Donald Trump spoke passionately about Doral -- one of a string of clubs he owns around the world.

President Donald Trump, who is to host next year's G7 summit, already has a venue in mind -- one of his very own Florida golf courses.

Speaking Monday on the last day of the G7 in Biarritz, France, Trump said the Doral resort near Miami was an ideal location for the annual gathering of the world's richest democracies.

"It's a great place. It's got tremendous acreage, many hundreds of acres, so we can handle whatever happens," he told reporters.

Trump, a lifelong real estate developer whose brand revolves around luxury golf courses, skyscrapers and his own name, spoke passionately about Doral -- one of a string of clubs he owns around the world.

"People are really liking it," he said, adding that a final decision had not been taken.

"It's right next to the airport, meaning a few minutes away... plus it has buildings that have 50 to 70 units in them, so each delegation can have its own building."

"They love the location of the hotel," he said. "It's Miami."

Trump also spoke enthusiastically about the French-hosted G7, which took place in a luxurious hotel overlooking the Biarritz beach.

"We can learn from what took place here," he said.

Trump, a keen golfer himself, has drawn criticism for his frequent use of his resorts for official business.

He takes a winter vacation at Mar-a-Lago, another resort in Florida, and spends his summer break at the Trump golf course in Bedminster, New Jersey. While in Washington, he often goes out on the weekend to play at his Sterling, Virginia, golf course.

On a visit to Europe this June to join commemorations for the 75th anniversary of D-Day, Trump made time to swing by his Doonbeg golf course in Ireland.