Donald Trump has repeatedly attacked Jeff Sessions for recusing himself from the investigation into Russian interference in the 2016 US presidential election campaign. 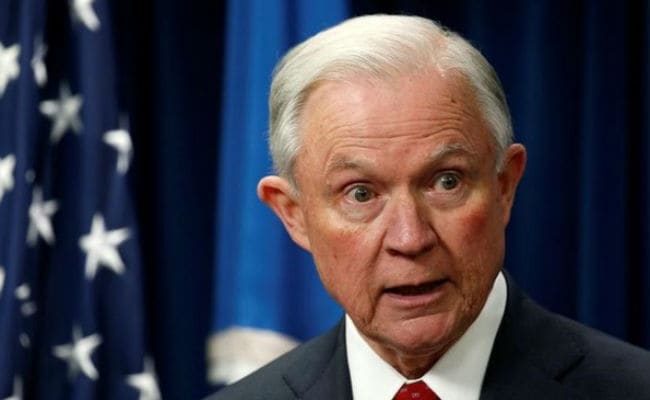 President Donald Trump said on Thursday that Attorney General Jeff Sessions was safe in his job at least until the November congressional elections, Bloomberg News reported after interviewing the US leader.

"I just would love to have him do a great job," Bloomberg quoted Trump as saying. It said the president declined to comment when asked whether he would keep Sessions in office beyond November.

Trump has repeatedly attacked Sessions for recusing himself from the investigation into Russian interference in the 2016 US presidential election campaign. After the recusal, Deputy Attorney General Rod Rosenstein appointed Special Counsel Robert Mueller to lead the probe, which Trump has called a "witch hunt."

Asked in the Bloomberg News interview whether he would comply if Mueller issued a subpoena for him to appear for questioning, Trump said, "I'll see what happens."

"I view it differently," Bloomberg quoted Trump as saying. "I view it as an illegal investigation" because "great scholars" have said that "there should never have been a special counsel."

The president has repeatedly criticized Sessions over the Russia probe and resumed the attacks via Twitter last week, saying the attorney general had never fully exerted control over the Justice Department.

Sessions, in a rare rebuttal, responded that he took control of the department the day he became attorney general and would not allow it to be "improperly influenced by political considerations."

Trump said in a Twitter post on Saturday that Sessions "doesn't understand what is happening underneath his command position." He charged that Mueller's probe was "highly conflicted" and that "real corruption goes untouched."

Some Republican lawmakers have predicted Trump would replace Sessions, a former US senator, after the Nov. 6 elections.

Senator Lindsey Graham, who is close to Trump and a defender of Sessions, said last week he believed Trump would appoint a new attorney general but should wait until the elections, in which Republicans are seeking to maintain control of both the House of Representatives and Senate.