"Look What I Did To Her Sons": Trump On Why Barbara Bush Dislikes Him

The relationship between Donald Trump and the Bush family have been long strained. The Bushes represent a Republican Party that is hardly recognizable in Trump era. 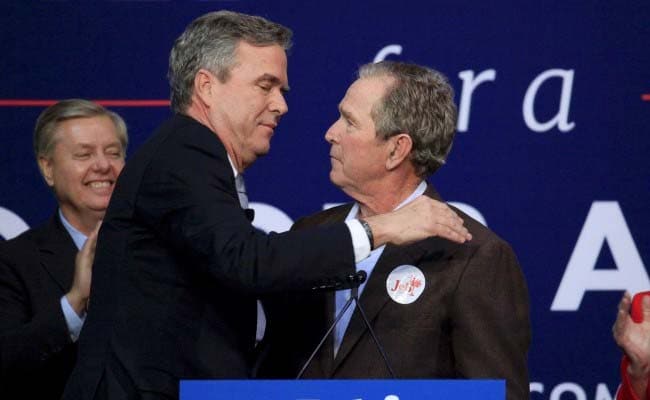 Trump attacked George Bush for Iraq war and embarrassed his brother Jeb in the 2016 presidential primary.

"I have heard that she was nasty to me, but she should be," he said. "Look what I did to her sons," he said.

Trump made the comments during an interview with the Washington Times on Thursday.

Relations between Trump and the Bush family have long been strained. The late Barbara Bush's dislike of Trump goes back to the 1990s when she wrote in her diary that Trump represents "greed, selfishness and ugly," according to a new biography, "The Matriarch: Barbara Bush and the Making of a Dynasty."

The Bushes represent a Republican Party that is hardly recognizable anymore in the era of Trump. Trump ran his presidential campaign attacking her son President George W. Bush for the war in Iraq and embarrassed another son, Jeb Bush, during the 2016 GOP presidential primary.

Jeb Bush was considered the front-runner of that election until Trump disrupted the entire political establishment. He called Bush "Low Energy Jeb," and beat him in the early primary states, forcing Bush to drop out early in the campaign.

The Bush sons have largely stayed out of the fray, save for a veiled remark about Trump from time to time. Just last week, George W. Bush defended immigrants and in discussing the presidency said, "I understand a lot of people are concerned right now," during a speech at an event for the History Channel.

Barbara Bush blamed Trump for the anxiety she felt throughout the 2016 election. According to the biography, she woke up the morning after the election "and discovered, to my horror, that Trump had won." The biography also revealed that she had a clock beside her bed that counted down the days until the end of Trump's term.

Asked a month before she died if she still was a Republican, she answered, "I'd probably say 'no' today."