Donald Trump said he was weighing commuting the prison sentence of former Illinois governor Rod Blagojevich, D, as well as granting a pardon to Martha Stewart, the television personality and lifestyle mogul 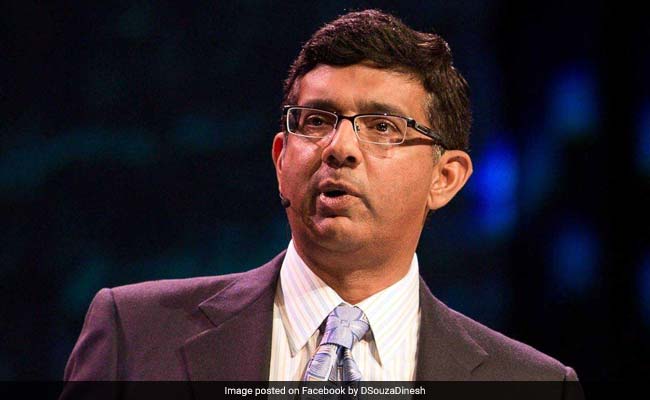 Washington: President Donald Trump granted a full pardon Thursday to conservative commentator Dinesh D'Souza and said he was strongly considering clemency for other celebrity felons, signaling his willingness to exercise his unilateral power to reward friends and allies while undercutting the work of his nemeses in law enforcement.

Trump said he was weighing commuting the prison sentence of former Illinois governor Rod Blagojevich, D, as well as granting a pardon to Martha Stewart, the television personality and lifestyle mogul, arguing that they and D'Souza had been unfairly treated by the justice system.

With Thursday's announcements, Trump also delivered an indirect but unmistakable message to personal attorney Michael Cohen, former national security adviser Michael Flynn and others ensnared in Trump-related investigations that they, too, could be spared punishment in the future.

D'Souza, Blagojevich and Stewart had been convicted of such crimes as campaign-finance violations or lying to investigators - charges similar to those brought against Flynn, former Trump campaign manager Paul Manafort and other Trump associates indicted in special counsel Robert Mueller III's Russia investigation. Cohen, meanwhile, is under investigation by federal prosecutors in New York for possible campaign-finance violations and other possible crimes.

Another pattern in Trump's granted or potential pardons is their connection to the president's perceived enemies. Former FBI director James Comey, whom Trump fired last year, prosecuted Stewart in her insider-trading case, while Comey's close friend, former U.S. attorney Patrick Fitzgerald, prosecuted Blagojevich. Former U.S. attorney Preet Bharara - who, like Comey, was fired by Trump and has since been an outspoken critic - prosecuted D'Souza.

Roger Stone, a longtime Trump associate and his former political strategist, who has come under scrutiny by Mueller's team, said the president sent a clear message.

"It has to be a signal to Mike Flynn and Paul Manafort and even Robert Mueller III: Indict people for crimes that don't pertain to Russian collusion and this is what could happen," Stone said. "The special counsel has awesome powers, as you know, but the president has even more awesome powers."

Trump's pardon of D'Souza was his sixth act of clemency as president. Each was issued unilaterally, subverting the traditional Justice Department process of reviewing thousands of pardon requests.

D'Souza is an author, filmmaker and provocateur who became a cult figure on the right in part because of his conspiratorial polemics about Barack Obama and Hillary Clinton. He pleaded guilty in 2014 to illegally using straw donors to contribute to a New York Republican candidate for U.S. Senate, telling a judge that he knows what he did was "wrong" and "I deeply regret my conduct."

Prosecutors said D'Souza had other individuals donate money to Republican Wendy Long, a Republican who was challenging Sen. Kirsten Gillibrand, D-N.Y., in 2012, under the agreement that he would reimburse them for the donations.

D'Souza was sentenced to five years of probation, including eight months living under supervision in a "community confinement center" in San Diego, and a $30,000 fine.

Trump, who announced his plans for the pardon Thursday morning on Twitter, later told reporters traveling with him on Air Force One that he had long felt D'Souza's sentence was too harsh.

"I've always felt he was very unfairly treated," Trump said. "And a lot of people did, a lot of people did. What should have been a quick, minor fine, like everybody else with the election stuff . . . . What they did to him was horrible."

D'Souza tweeted that he was grateful to Trump for his pardon and said of his prosecution, "Bharara & his goons bludgeoned me into the plea."

Earlier this spring, Sen. Ted Cruz, R-Texas, brought up D'Souza's situation to Trump and personally lobbied him to consider a pardon, according to White House officials. The senator, who accompanied Trump to a political fundraiser Thursday in Houston, cheered the decision.

"Bravo!" Cruz wrote in a tweet in which he claimed that D'Souza "was the subject of a political prosecution." D'Souza, he added, is "a powerful voice for freedom, systematically dismantling the lies of the Left - which is why they hate him. This is Justice."

Trump, however, told reporters that "nobody asked me to do it" and claimed that he had never met D'Souza, although he said he has seen him on television.

"I called him last night, first time I've ever spoken to him," Trump said. "I said, 'I'm pardoning you.' " He added that D'Souza "almost had a heart attack" during their three-minute phone call. 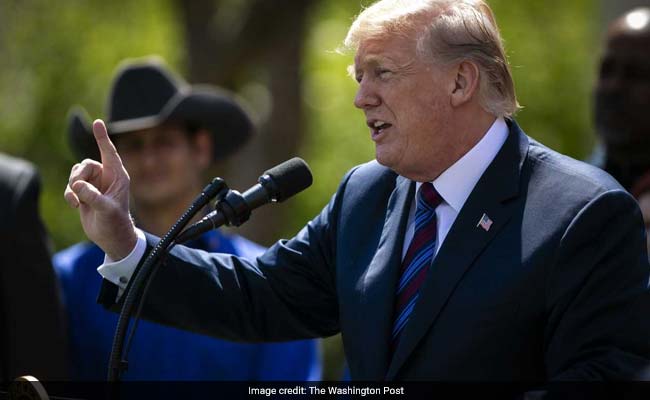 But Sam Nunberg, Trump's former political aide, recalled that D'Souza visited Trump at Trump Tower in New York in 2012, shortly before releasing his film, "2016: Obama's America," which was based on his earlier book, "The Roots of Obama's Rage."

Nunberg said that Trump agreed to help D'Souza promote the film. Trump sent three tweets about D'Souza's movie that August, including one calling it an "amazing film."

A White House spokesman said he could not immediately square the conflicting accounts of whether Trump had previously met D'Souza.

Trump's clemency for D'Souza was sharply criticized by New York Attorney General Barbara Underwood, D, who said it "makes crystal clear his willingness to use his pardon power to thwart the cause of justice, rather than advance it."

Trump also signaled Thursday that he is considering commuting the remainder of the sentence of Blagojevich, who was convicted in 2010 on charges relating to the attempted sale of Obama's former U.S. Senate seat.

"What he did does not justify 18 years in a jail," Trump told reporters traveling on Air Force One. "If you read his statement, it was a foolish statement, there was a lot of bravado. But . . . plenty of other politicians have said a lot worse. And . . . he shouldn't have been put in jail."

Trump overstated the duration of Blagojevich's prison sentence, which is 14 years.

Trump also cited the case of Stewart, who was convicted in 2004 of obstructing justice and lying to investigators about a well-timed stock sale.

"I think to a certain extent Martha Stewart was harshly and unfairly treated," Trump said. "And she used to be my biggest fan in the world . . . before I became a politician. But that's OK. I don't view it that way."

A senior White House official said that as many as a dozen other pardons are under consideration by Trump, adding that most are likely to happen. "There are going to be more," said the official, who spoke on the condition of anonymity to comment candidly on the issue.

Traditionally, people seeking pardons apply through the Justice Department's Office of the Pardon Attorney, which reviews thousands of cases and advances some to the White House for the president's consideration.

But Trump has used his clemency powers in a more haphazard way, spurred by personal connections or political calculations. Most of the pardons are impulsive, according to a person familiar with the process, and are driven by his "seeing something on TV, reading something in a newspaper, hearing from a friend or someone lobbying him personally." The president then usually asks White House lawyers to review the cases and prepare actions.

"With Sheriff Joe, there was no process, no examination of exactly what did he do, what did he deserve?" said the person familiar with the process. "Someone said this is a miscarriage of justice on Fox News. Trump liked Sheriff Joe. That was it."

The only real exception, this person said, was Sholom Rubashkin, an Orthodox Jewish meat executive, whose prison sentence Trump commuted last December. While Rubashkin's case did not come through the pardon office and was not vetted by the pardon attorney, it came with analysis from lawyers inside and outside the administration, this person said, and was closely considered for at least three months.

"There are thousands of cases pending, ordinary cases from ordinary Americans, who are being told if they want this relief they can apply through the Justice Department and be fairly considered," Love said. "But in reality, you have to be able to figure out how to get cases to him and interest him personally in them."

Actor Sylvester Stallone personally lobbied Trump to grant a posthumous pardon to heavyweight boxing champion Jack Johnson, which the president did in May. And reality television star Kim Kardashian visited Trump in the Oval Office on Wednesday to ask for a pardon of Alice Marie Johnson, who is serving a life sentence for a drug-trafficking conviction.

Asked why Trump has largely pardoned celebrities, White House deputy press secretary Hogan Gidley told reporters that "there are plenty of people the president is looking at right now under the pardon process." Gidley added, "That's a power outlined by the Constitution, one in which he understands the gravity."

Stewart and Blagojevich have ties to "The Apprentice," Trump's long-running reality television series on NBC. Stewart was the host of a short-lived spinoff, "The Apprentice: Martha Stewart," in 2005. And Blagojevich was a contestant on "Celebrity Apprentice" in 2010, after he was indicted but before his convictions. Trump praised Blagojevich at the time as having "a lot of guts" to appear on the program.

Trump also has donated to Blagojevich's gubernatorial campaigns: $5,000 in 2002 and $2,000 in 2007, according to Illinois state records. Trump's company at the time was developing the Trump International Hotel and Tower, a downtown Chicago skyscraper that was announced in 2001 and opened in 2009.

A number of people close to Trump, including longtime friend and Newsmax chairman Christopher Ruddy, have personally appealed to the president to commute Blagojevich's sentence, arguing that it is far too harsh.

Blagojevich has failed to convince the U.S. Supreme Court to review his conviction and sentence, most recently in April. Trump's own solicitor general, Noel Francisco, advised the court not to take the case, saying a review was "unwarranted."

In a statement Thursday, Len Goodman, a lawyer for Blagojevich, said he was grateful that Trump understands the "unfairness" of his client's case. "It's time for Rod Blagojevich to come home to his wife and daughters," Goodman said.

(Except for the headline, this story has not been edited by NDTV staff and is published from a syndicated feed.)
Comments
Donald TrumpDinesh D'Souza