Donald Trump will also hold talks with Theresa May during the trip, with the issue of post-Brexit trade ties looming large. 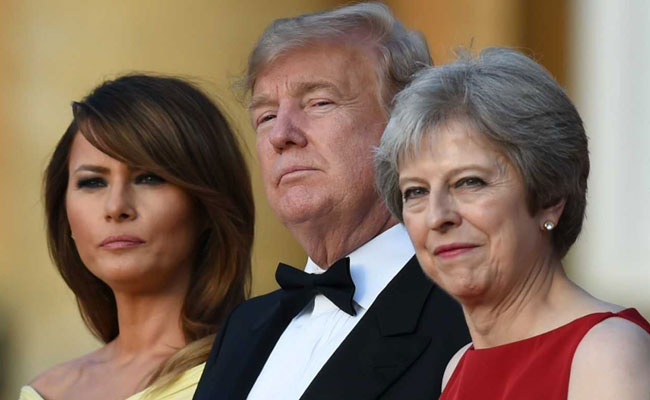 US President Donald Trump is to make a state visit to Britain June 3-5, just ahead of D-Day commemorations in France, officials said on Tuesday, as campaigners announced large-scale protests against him.

Trump is a strong supporter of Brexit but has been highly critical of the way Prime Minister Theresa May has sought to implement the result of a 2016 referendum.

Trump and First Lady Melania will be guests of 93-year-old Queen Elizabeth II, becoming only the third US presidential couple during her reign to receive the honour after George W. Bush in 2003 and Barack Obama in 2011.

Trump will also hold talks with May during the trip, with the issue of post-Brexit trade ties looming large.

"We do more together than any two nations in the world and we are both safer and more prosperous because of our cooperation," Ms May said in a statement on the visit.

She said it would be "an opportunity to strengthen our already close relationship in areas such as trade, investment, security and defence, and to discuss how we can build on these ties in the years ahead."

The pomp associated with state visits will prove particularly controversial in Britain, where House of Commons Speaker John Bercow has already said he does not want the US president to address parliament.

Even the official White House statement drew hilarity online because it referred to Queen Elizabeth by the non-existent title of "Her Royal Majesty".

"At least they spelled it right," wrote one user.

May invited Trump for a state visit in January 2017 when she went to Washington just days after he took office in what was widely seen as an attempt to curry favour as Britain negotiated its break-up with the EU.

An online petition to cancel Trump's state visit reached 1.9 million signatures in 2017 and the trip has been delayed several times since then.

On the last day of his visit, June 5, Trump is to attend a big military ceremony in Portsmouth, southern England, from where ships left for D-Day landings 75 years ago in the largest seaborne invasion in history.

Downing Street said the event would be "one of the greatest British military spectacles in recent history" involving 26 RAF aircraft and 11 Royal Navy vessels.

The event will include veterans of the operation and representatives of allied nations and Germany.

"The freedom we have today would not be possible without the incredible sacrifice of troops from across the world 75 years ago," May said.

"I am proud that the UK will host representatives and veterans from allied nations to pay tribute to that sacrifice and recognise the extraordinary cooperation that made the Normandy landings possible," she said.

Trump is then to visit Normandy on June 6 for the main D-Day commemorations, the statement said.

British anti-Trump campaign groups meanwhile pledged to mobilise in "huge numbers" to protest against the president.

When Trump last visited Britain in July 2018, hundreds of thousands of people took to the streets in opposition, under a large inflatable effigy of Trump as a baby.

Shaista Aziz from the Stop Trump coalition blamed Trump for a "politics of hate and bigotry" and said it was time for his critics to "stand up and be counted".

Sabby Dhalu from the Stand Up To Trump group added: "All those that value peace and hope for a better world for the many must take to the streets and say clearly that Donald Trump is not welcome here".

(Except for the headline, this story has not been edited by NDTV staff and is published from a syndicated feed.)
Comments
Donald Trump-Theresa MayUS-Uk RelationsTrump in UK