"President Is Not King In America," Say Democrat Presidential Candidates

"If President Trump thinks he should not be impeached, he should be not scared to put forward his own witnesses," U.S. Senator Amy Klobuchar said. "The president is not king in America, the law is king." 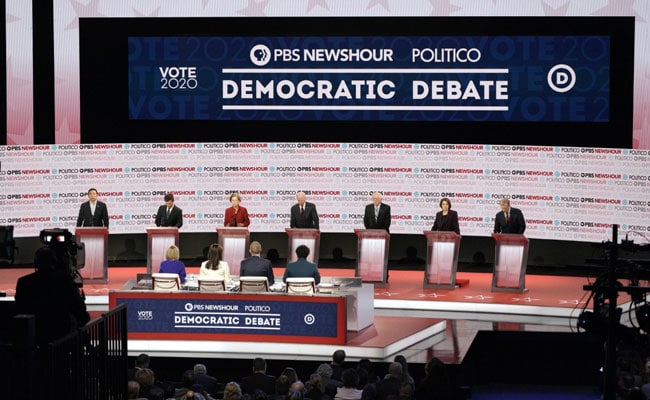 The Democratic U.S. presidential candidates promised during a debate on Thursday to make the case to a divided American public that the impeachment of Donald Trump was necessary, and some said they wanted to hear testimony from top White House aides at the Republican president's upcoming Senate trial.

The day after the House of Representatives voted to impeach Trump, many of the seven contenders taking part in the debate acknowledged the American public is split over the move, with Republicans largely opposing it and Democrats favoring it. But they said it is a fundamental question of right and wrong.

U.S. Senator Amy Klobuchar, one of three contenders on the debate stage who will sit as jurors at a trial in the Republican-led Senate to determine whether Trump is removed from office, said presidential aides should be called to testify.

"If President Trump thinks he should not be impeached, he should be not scared to put forward his own witnesses," U.S. Senator Amy Klobuchar said. "The president is not king in America, the law is king."

The Democratic candidates are seeking their party's nomination to challenge Trump in the November 2020 election.

In a historic vote on Wednesday, the Democratic-led House voted to impeached Trump on charges of abuse of power and obstruction of Congress arising from his request that Ukraine investigate Democratic political rival Joe Biden and Biden's son Hunter, who had joined the board of Ukrainian energy company Burisma while his father was U.S. vice president.

Trump became only the third U.S. president to be impeached by the House. No president has ever been removed from office via impeachment.

Democrats have pressed the Senate's Republican leaders to solicit testimony at the trial from some current and former Trump's lieutenants including Mick Mulvaney, the acting White House chief of staff, and John Bolton, Trump's former national security adviser. Republicans have not decided whether to allow witnesses at the trial.

With deep and widening partisan divisions in the United States, Biden made the case for the importance of Democrats being able to work with Republicans.

"I refuse to accept the notion - as some on this stage do - that we can never never get to a place where we have cooperation again. If that's the case, we are dead as a country," Biden said.

"If anyone has reason to be angry with the Republicans and not want to cooperate it's me," Biden added. "They have attacked me and my son and my family. I have no love. But the fact is, we have to be able to get things done."

The candidates said they would try to convince the public of Trump's unsuitability for the office.

"We have to prosecute the case against him, and that means we need a candidate for president who can draw the sharpest distinction," said U.S. Senator Elizabeth Warren, another juror in the trial due next month.

U.S. Senator Bernie Sanders, another of the jurors in the trial, said the United States "cannot have a president with that temperament who is dishonoring the presidency of the United States."

The debate was the sixth in the race to pick a Democratic challenger to Trump. The seven candidates taking part were the fewest since the debates began in the summer.

But the debate's timing - coming a week before the holidays and amid the impeachment fireworks in Washington - could reduce the audience and the benefits for the Democrats as they seek a boost ahead of the first state nominating contest in Iowa on Feb. 3.

The race for the Democratic presidential nomination remains up for grabs seven weeks before the first votes are cast in Iowa in the state-by-state battle to determine the party's nominee. There is a three-way battle at the top of national polls among Biden, Sanders and Warren, with South Bend, Indiana Mayor Pete Buttigieg rising to lead some polls in early voting states.

The number of candidates on stage was narrowed from 10 last month in Georgia, and 12 in October, by tougher polling and fundraising eligibility requirements.

In a party that prides itself on its diversity, the debate lineup has been criticized for being nearly all-white - Asian-American entrepreneur Andrew Yang is the only minority candidate to qualify.

"It's both an honor and a disappointment to be the only candidate of color on the stage," Yang said.