From climate change to tensions in the Middle East, via trade conflicts and fears of pandemics, the more than 3,000 delegates at the World Economic Forum will thrash out challenges as imposing as the surrounding Swiss Alps. 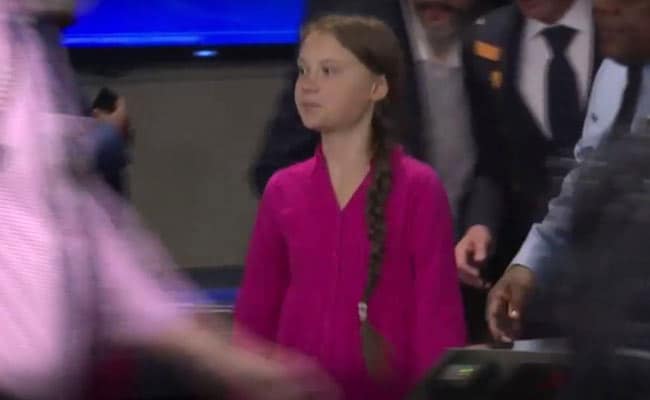 US President Donald Trump will renew his running battle with young climate campaigner Greta Thunberg when they join the A-list movers and shakers attending the 50th anniversary of the Davos conclave next week.

From climate change to tensions in the Middle East, via trade conflicts and fears of pandemics, the more than 3,000 delegates at the World Economic Forum will thrash out challenges as imposing as the surrounding Swiss Alps.

The WEF has come a long way since its inaugural edition in 1971 and if the main business of Davos remains deal-making among corporate titans, climate change has come to dominate the catalogue of long-term planetary risks identified in a pre-meeting report compiled by the forum.

After trolling each other on Twitter, Trump and the 17-year-old Thunberg will bring rival messages to the well-heeled crowd. The Swede's impassioned speech, and famously hard stare at the US leader, at the UN General Assembly in September symbolised anger over climate inaction.

Trump, escaping his Senate impeachment trial back home, said his keynote address on Tuesday would tout "the most incredible" economy ever seen.

"I expect him to send a message to the American people and not to the international community," Carlos Pascual, a former US diplomat and now a vice president at IHS Markit, told AFP.

"The purpose of that message is to reinforce with the elector in the United States that his number one concern in international policy is 'America first'."

Thunberg, on the other hand, will tell her corporate audience that it is "madness" to continue investing in fossil fuels as disasters such as the wave of wildfires in Australia focus new attention on the baleful effects of rising temperatures.

On Friday, she joined a climate protest in the Swiss city of Lausanne featuring placards like "Wake Up and Smell the Bushfires!".

Thunberg may have a more receptive audience after Wall Street titan BlackRock -- whose CEO Larry Fink is a Davos perennial -- said it was partially divesting from businesses reliant on production of electricity-generating coal.

Another issue set to darken the snowy Davos horizon is the risk of conflict between the United States and Iran, as tensions spike following the US killing of a top Iranian commander and Iran's subsequent accidental downing of a Ukrainian airliner.

Iranian Foreign Minister Mohammad Javad Zarif, however, cancelled his planned participation at the four-day forum, removing any chance of a showdown with Trump.

With Chinese Vice Premier Han Zheng leading a top-level delegation from Beijing, the trade dispute between China and the US will also loom large, even after this week's signing of a deal that marked a truce after two years of tensions.

The fate of Chinese telecoms company Huawei, the subject of US sanctions, remains on the dispute agenda. Its top executives will be prowling Davos to insist that their technology poses no security risk to Western governments rolling out 5G networks.

Key European figures present will be EU Commission chief Ursula von der Leyen and German Chancellor Angela Merkel, who may only serve to highlight the extent of differences between Europe and the United States on key issues.

"On climate change and on many global conflicts -- such as the US conflict with Iran -- US and European leaders disagree not just on the solution but also on the very nature of the problem," Jeremy Shapiro, research director of the European Council on Foreign Relations, told AFP.

He said that while EU leaders see climate change as an "existential challenge", Trump considers it a "Chinese hoax".

The two sides are also at loggerheads over the Iran nuclear deal from 2015 that was supposed to defuse the risk of conflict with Tehran.

"None of this is a firm foundation on which to build common solutions to vexing global problems," Shapiro said.

In its global risk report issued ahead of Davos, the WEF singled out popular discontent over economic instability, climate change, unequal access to the internet and healthcare systems under stress as pivotal challenges for humanity.

Another threat was the growing distrust of vaccines as well as the increasing resistance of many germs to antibiotics and other drugs.