Donald Trump Forgets What He Had Gifted To Queen. Melania To The Rescue

Donald Trump was shown a statue of a horse by the Queen, seeing which he looked a bit puzzled, according to The Sun. However, Melania was quick to point out that the statuette was gifted by Trump to the Queen less than a year ago. 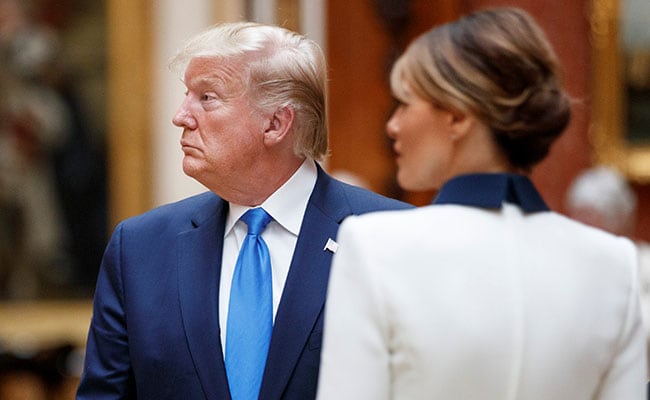 Amid the pomp and pageantry of United States President Donald Trump's symbolic visit to the Buckingham Palace, First Lady Melania Trump came to the rescue of her husband when the latter couldn't recognise the gift he gave Queen Elizabeth II.

Trump was shown a statue of a horse by the Queen, seeing which he looked a bit puzzled, according to The Sun. However, Melania was quick to point out that the statuette was gifted by Trump to the Queen less than a year ago.

The anecdote was shared by The Sun's Royal correspondent, Emily Andrews, on Twitter. "Trump was also shown the pewter horse that he'd given the Queen last year in his visit to Windsor. He was asked if he recognised it and he said "no"! Melania came to his rescue and said: "I think we gave that to the Queen" she tweeted on Monday.

Owing to the fact that Queen Elizabeth II has gifted Trump with a 1959 first edition of The Second World War by Winston Churchill and a three-piece Duofold pen set, this present gaffe may well continue into the next Anglo-US meeting, a report by Express.co.uk wittily notes.

Social media users were quick to comment on the incident and expressed views that were both hilarious and critical.

One user wrote, "Exactly like all married couples worldwide. Wife picks gift that both give, husband pays no attention. I think every married couple knows this."

Another user said, "Absurd the taxpayers of America are giving @RoyalFamily more stuff. They don't need more stuff. We should be using our money for more important things. Insane."

The Trumps are currently on a three-day official state visit to the UK. Gun salutes in Green Park and at the Tower of London greeted the family upon their arrival in Buckingham Palace on Monday.

Earlier in the day, Trump took to Twitter to affirm that the US' relations with the UK are ''very strong''. He also hinted at inking a ''big trade deal''.

"London part of trip is going really well. The Queen and the entire Royal family have been fantastic. The relationship with the United Kingdom is very strong. Tremendous crowds of well-wishers and people that love our Country" he tweeted.

"Haven't seen any protests yet, but I'm sure the Fake News will be working hard to find them. Great love all around. Also, big Trade Deal is possible once UK gets rid of the shackles. Already starting to talk!" read another tweet.

Earlier in the day, Trump, who pulled the US out of the Paris climate change agreement, met Prince Charles, who is known to be a passionate environmentalist.