"Not At All": Trump Denies Covering Up For Saudi In Jamal Khashoggi Case

Donald Trump has said he would get a "full report" from Secretary of State Mike Pompeo on the diplomat's return from meetings with Saudi and Turkish leaders. 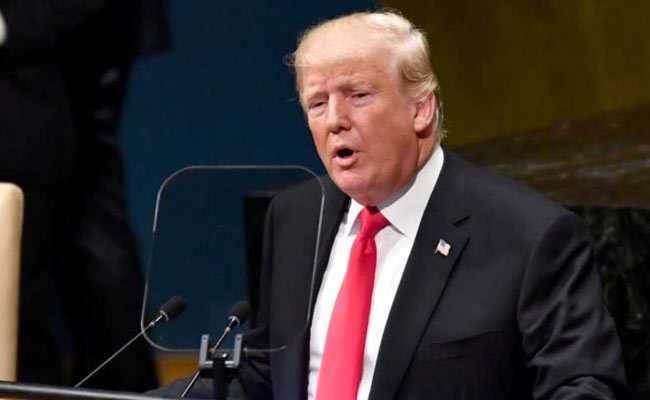 The US president has been on the defensive ever since Jamal Khashoggi disappeared.

President Donald Trump on Wednesday denied covering up for ally Saudi Arabia in the suspected murder of a critical journalist and said that he should know what happened to Jamal Khashoggi within days.

"No not at all, I just want to find out what's happening," Trump told reporters in the White House when asked if his consistently cautious approach to the scandal amounts to a cover-up. "I'm not giving cover at all."

The president said he would get a "full report" from Secretary of State Mike Pompeo on the diplomat's return from meetings with Saudi and Turkish leaders and that he'd then know the truth.

"We will probably know that by the end of the week," Trump said.

His comments followed publication in pro-government Turkish media of allegations purporting to confirm that Khashoggi was not just murdered by Saudi agents in their consulate in Istanbul, but dismembered.

According to the reports, the assassination squad included agents tied to Crown Prince Mohammed bin Salman, a powerful figure in the Saudi royal family and lynchpin in the trend toward ever-tightening relations with the White House.

The US president has been on the defensive ever since Khashoggi -- a US resident and Washington Post contributor who had criticized Prince Mohammed -- vanished on October 2 after visiting the Istanbul consulate.

The controversy has blown a massive hole in Prince Mohammed's bid to promote himself as the modern face of Saudi Arabia and led to a spate of cancelations by attendees at a major Riyadh investment conference scheduled next week.

But Trump has slow-pedaled on the possibility of action against Saudi Arabia, which he has repeatedly praised as a historic customer for the US weapons industry. Earlier Wednesday, he told Fox Business that the US relies on the kingdom in the fight against terrorism.

After talks with the Saudi leadership in Riyadh marked by expressions of mutual goodwill, Pompeo met Turkish President Recep Tayyip Erdogan in Ankara.

But Pompeo was tight-lipped, telling journalists he did not want "to talk about any of the facts."

Turkish police on Wednesday began searching the residence of the Saudi consul in Istanbul for their investigation, with forensics experts in white overalls entering the building, an AFP correspondent said.

The Saudi consul Mohammed al-Otaibi left Istanbul for Riyadh on a scheduled Saudia flight Tuesday afternoon, with Ankara insisting he had not been expelled but left of his own choice.

Turkish police on Monday night also carried out an eight-hour search at the consulate itself, taking away soil and DNA samples. Erdogan said toxic material was found which had been "painted over".

Several US media outlets said Monday that the Saudis are preparing a report that Khashoggi's death resulted from a botched interrogation. However there has yet to be any sign of this being published.

Pro-government Turkish daily Yeni Safak reported it had heard audio recordings of Khashoggi being tortured during an interrogation, having his fingers cut off and then being decapitated.

It said al-Otaibi can be heard on one tape saying during Khashoggi's torture: "Do this outside. You are going to get me in trouble."

The daily reported that in another tape, an unknown individual tells Otaibi: "If you want to live when you return to Saudi Arabia, be quiet!"

The New York Times reported Tuesday that a suspect identified by Turkey was a frequent companion of the prince's. Three other suspects are linked to his security detail and a fifth is a high-level forensic doctor, the Times said.

International Monetary Fund chief Christine Lagarde was the latest to pull out of Prince Mohammed's much-trumpeted investment conference next week. An IMF spokesman said she had postponed her planned trip to the Middle East with a stop in Saudi Arabia.

Pompeo came to Ankara after Riyadh where he held a 20-minute talk with King Salman and then a brief meeting and much lengthier dinner with his son Prince Mohammed.

The top US diplomat said that in Saudi Arabia he stressed the "importance of them conducting a complete investigation."

"They made a commitment that they would show the entire world the results of their investigation," said Pompeo, adding Saudi also vowed that no-one would have immunity.

Pompeo held 40 minutes of talks at the airport with Erdogan.

Interviewed by state-run Anadolu news agency, Turkish Interior Minister Suleyman Soylu refused to be drawn into commenting on what may have happened inside the