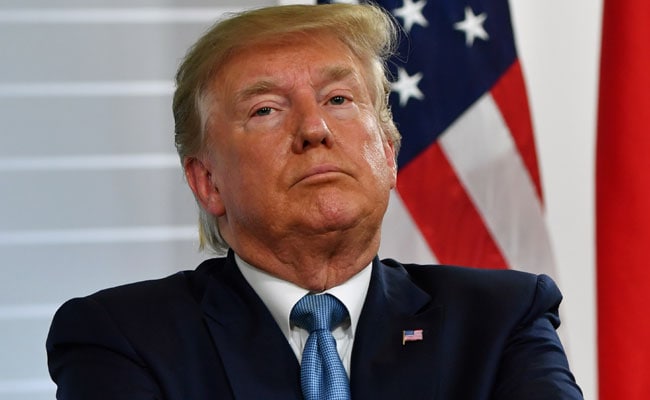 Iranian Foreign Minister Mohammad Javad Zarif made a surprise visit to the city hosting the Group of Seven summit Sunday, a move that caught President Donald Trump off-guard and added another element of tension to the meeting of world economic leaders.

Zarif's arrival in Biarritz appeared to be a covert initiative by French President Emmanuel Macron, a senior European official said, and at least some other leaders were not informed ahead of time.

Trump, whose antics have often left other world leaders searching for words, had little to say about the unexpected guest.

Zarif came to this resort town on the invitation of his French counterpart, Jean-Yves Le Drian, Iranian Foreign Ministry spokesman Abbas Mousavi wrote on Twitter. The aim of the visit was to "continue discussions about recent initiatives between the presidents of Iran and France," Mousavi said.

The Iranian diplomat was in town for about five hours before departing on his Iranian government jet. He met with Macron, Le Drian and British and German diplomats before leaving, he wrote in a tweet.

"Iran's active diplomacy in pursuit of constructive engagement continues," Zarif wrote after his meetings. "Road ahead is difficult. But worth trying.".

White House officials have complained for weeks that Macron was trying to forcefully broker talks between the Trump administration and Iran. The U.S. president has branded Iran a "number one terrorist nation."

Trump pulled the United States from the landmark nuclear deal between Iran and world powers in May 2018. The deal, negotiated by the Obama administration, restricted Iran's nuclear capabilities in exchange for the easing of sanctions.

French officials have said Trump's "maximum pressure" approach against Iran is doomed to fail. They have sought to persuade the White House to change course and accept a new deal with the Iranians.

Trump's pressure campaign has involved a mix of sanctions and public threats aimed at crippling Iran's economy - and, recently, new sanctions and travel restrictions on Zarif.

The foreign minister's presence in Biarritz - at the invitation of the French president during a summit of world leaders who know Zarif well - underscored how isolated the Trump administration has become in its approach to Iran.

Even as Iranian forces have stepped up their aggression by seizing several tankers in the Strait of Hormuz, European leaders have sought to maintain the 2015 nuclear deal without the United States. Zarif's visit appeared to be a gambit to break the logjam.

An earlier discussion on Iran during the summit showed little progress, as leaders could not agree publicly about even the terms of their talks.

They planned to revisit their conversations on Monday after Zarif's departure, a French official said.

Trump said Sunday he had not discussed a joint approach to Iran. French officials insisted a consensus had been reached among leaders Saturday night.

"I haven't discussed that," Trump said. "We will do our own outreach, but I can't stop people from talking. If they want to talk, they can talk."

Administration officials have criticized the French for talking to Iran.

When leaders discussed Iran over dinner on Saturday, they agreed broadly that Iran should not be allowed to develop nuclear weapons and that they should work to de-escalate the ongoing crisis, according to officials who were briefed on the closed-door talks.

Macron pushed Trump to allow Iran to export a limited amount of oil - a nonstarter with the White House.

Zarif's sudden arrival in Biarritz took at least some of the other delegations by surprise, even those aligned with France in its commitment to preserve the nuclear deal, according to a senior European official who, like others in this article, spoke on the condition of anonymity because the official was not authorized to comment publicly.

The official said it was not immediately clear why Zarif had been invited.

Because Europe's strength on the Iran deal has been its unity, the official said, the unilateral move to call in Zarif could prove counterproductive.

But a French official, speaking on the condition of anonymity, said Zarif had been invited to be debriefed about the G-7 discussions of the previous day and so Macron could continue pushing an effort to get Iran back into compliance with the nuclear deal.

The official said Macron had told Trump ahead of time that he planned to invite Zarif for a discussion.

Zarif was in Paris on Friday for discussions with Macron and other French officials. He had planned to travel in Asia this weekend, according to his Twitter account.

His arrival in the French resort town appeared to take the State Department by surprise, as well. A spokeswoman noted the agency's absence from the summit and referred questions to the White House.

Trump is traveling in Biarritz with national security adviser John Bolton, one of the administration's fiercest critics of Iran.

Secretary of State Mike Pompeo has complained that Zarif has used media appearances to spread Iranian "propaganda" against the United States.

"The US' reason for designating me is that I am Iran's 'primary spokesperson around the world'," he tweeted. "Is the truth really that painful? It has no effect on me or my family, as I have no property or interests outside of Iran. Thank you for considering me such a huge threat to your agenda."

Zarif has been meeting with other world leaders, including Macron, about the nuclear issue. He has tweeted pictures of himself shaking hands with top officials and sought to contrast his embrace of diplomacy with the Trump administration's unilateral pressure campaign.

"Despite US efforts to destroy diplomacy, met with French President @EmmanuelMacron and @JY_LeDriane in Paris today," he tweeted Friday. "Interviewed with Euronews, AFP, & France24. Multilateralism must be preserved. Next stops Beijing, Tokyo & KL after a day in Tehran."

He did not mention that he would be stopping in Biarritz.

Treasury Secretary Steven Mnuchin indicated that Trump might be willing to meet with Zarif.

"The president has said before that to the extent that Iran wants to sit down and negotiate we would not set preconditions to those negotiations," he told reporters in France on Sunday. He declined to comment further.

But in Washington, Zarif's appearance drew warnings from Iran critics.

Former U.N. Ambassador Nikki Haley called it "completely disrespectful" to Trump and the other G-7 leaders.

"Iran supports terrorism at every turn and continues to pursue "Death to America," she tweeted. "Manipulative of Macron to do this and very insincere. #NotWhatFriendsDo"

And Sen. Lindsey Graham, R-S.C., said "hearing that the Europeans are negotiating with the Iranians again is of little comfort to me.