Trump all but claimed victory over the pandemic that has killed some 120,000 Americans -- "I have done a phenomenal job with it!" he insisted -- even as six members of his own Tulsa advance team tested positive for COVID-19. 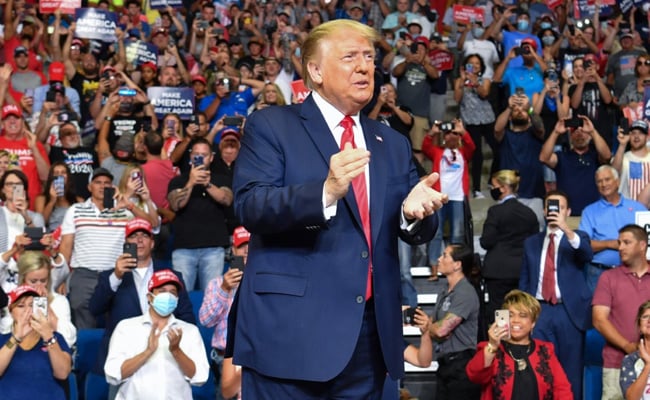 Trump engaged in his now-familiar baiting of his "socialist" Democratic rivals.

US President Donald Trump hailed his supporters as "warriors" Saturday for defying the coronavirus and attacked his Democratic rivals at his first campaign rally in three months, an event with crowds far smaller than promised.

Gathering his political faithful at a much-hyped rally in Oklahoma, the Republican president sought to reinvigorate his flagging campaign in the face of a crushing health and economic crisis as well as protests against racial injustice that have swept the nation in recent weeks.

Trump all but claimed victory over the pandemic that has killed some 120,000 Americans -- "I have done a phenomenal job with it!" he insisted -- even as six members of his own Tulsa advance team tested positive for COVID-19.

The event -- which the White House promised would be flooded with up to 100,000 people, but actually did not fill the 19,000-seat arena where Trump spoke -- has emerged as a flashpoint in the pandemic era.

But Trump was more interested in reviving his political fortunes after several bruising weeks that saw continued economic woes tied to the pandemic, nationwide protests over racial injustice, the toppling of Confederate and other statues and critics including former aides savaging his performance.

"The silent majority is stronger than ever before," Trump said in a rowdy, freewheeling speech in which he blasted his 2020 election rival, Democrat Joe Biden, as a "helpless puppet of the radical left."

Many rally-goers wore red "Make America Great Again" hats or T-shirts, but very few wore masks and there was little social distancing, even though coronavirus cases have recently been skyrocketing in Oklahoma.

The president has downplayed the risk that the evening rally -- with thousands of shouting, cheering attendees -- might trigger a coronavirus outbreak, ignoring danger warnings by Tulsa health and municipal officials.

Trump, 74, insisted he was in good health after a graduation ceremony where he appeared to show signs of fatigue, before quipping "I'll let you know if there is something wrong."

But the narrative of a trouble-free campaign event was punctured when the campaign announced just hours before the rally that six members of its Tulsa advance team tested positive for coronavirus.

Trump engaged in his now-familiar baiting of his "socialist" Democratic rivals.

He notably steered clear until well into the speech of the racial tensions that have swept the country in the weeks since a handcuffed African American, George Floyd, was killed by police in Minneapolis.

Instead he warned that Democrats were seeking to erase American heritage.

"The unhinged left-wing mob is trying to vandalize our history, desecrate our beautiful monuments, tear down our statues, and punish, cancel and persecute anyone who does not conform to their demands for absolute and total control," he said.

The stakes Saturday could not be higher -- both for the health of thousands spending hours at the arena and Trump's political fortunes five months before an election in which he trails in the polls.

"Today we're here to show we support President Trump and that we, the people, we'll win the 2020 election, no matter what the fake news media and other liberal, leftist, mind-controlling big firms are saying," said attendee Brad, who declined to provide his last name.

The rally has been controversial not just because of the virus risk. Originally it was scheduled for Friday -- the Juneteenth commemoration of the end of slavery in the US -- in a city known for one of the deadliest-ever massacres of African Americans.

Racial tensions have roiled the nation following the police killing of a black man, George Floyd, in Minneapolis. Trump has fanned the flames with provocative rhetoric, including a tweeted threat to protesters ahead of Tulsa's rally.

Dozens of Black Lives Matter protesters did gather at rally checkpoints and confronted attendees, but no violence was reported.

This was the first of Trump's signature rallies since March 2, when the country went into pandemic lockdown.

The virus dramatically disrupted a once-booming economy, which had been Trump's strongest re-election selling point.

With Oklahoma overwhelmingly Republican, Trump's job was not to win over locals, but to revive a campaign rocked by his handling of the pandemic and weeks of racial tensions.

With polls showing him trailing Biden, Trump is eager to change the narrative, and rallies have long been his favorite political tool.

But while Trump rolls the political dice, the crowd, albeit smaller than predicted, gambles with their health.

Oklahoma virus cases have spiked recently, and the state's total as of Saturday has surpassed 10,000.

Attendees were required to sign a waiver protecting organizers from any liability in the event COVID-19 spreads at the venue.