Donald Trump concluded by further distancing himself from the meeting his son arranged, writing, "I did not know about it!" 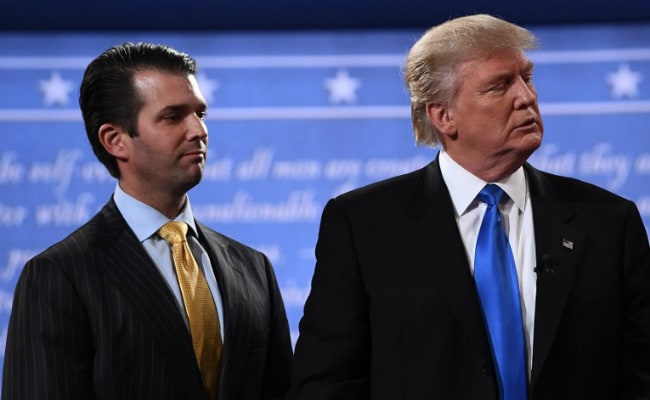 President Donald Trump on Sunday offered his most definitive and clear public acknowledgment that his oldest son met with a Kremlin-aligned lawyer at Trump Tower during the 2016 campaign to "get information on an opponent," defending the meeting as "totally legal and done all the time in politics."

It is, however, against the law for U.S. campaigns to receive donations or items of value from foreigners, and that June 2016 meeting between Donald Trump Jr. and Natalia Veselnitskaya is now a subject of Special Counsel Robert Mueller's Russia investigation.

While "collusion" is not mentioned in U.S. criminal statutes, Mueller is investigating whether anyone associated with Trump coordinated with the Russians, which could result in criminal charges if they entered into a conspiracy to break the law, including through cyberhacking or interfering with the election.

"Fake News reporting, a complete fabrication, that I am concerned about the meeting my wonderful son, Donald, had in Trump Tower," the president wrote in one of several early-morning tweets Sunday, many of which took aim at the news media. "This was a meeting to get information on an opponent, totally legal and done all the time in politics - and it went nowhere."

He concluded by further distancing himself from the meeting his son arranged, writing, "I did not know about it!"

Trump was responding to a Washington Post report this weekend that although he does not think his eldest son intentionally broke the law, he is worried that Trump Jr. may have unintentionally stumbled into legal jeopardy and is embroiled in Mueller's investigation largely because of his connection to the president.

On Sunday, one of the president's attorneys defended the 2016 meeting as something that would not have been illegal under any federal statute.

"The question is: How would it be illegal?" Jay Sekulow asked on ABC News' "This Week," suggesting that there are no laws prohibiting campaign operatives from meeting and working with foreign agents. "Nobody's pointed to one."

The Trump Tower meeting also included Trump's son-in-law, Jared Kushner, and his campaign chairman at the time, Paul Manafort, who is on trial over tax and bank fraud charges after being indicted by Mueller.

Trump's tweet, however, conflicts with a statement that Trump Jr. released to the New York Times in July 2017, as the newspaper prepared to report about the meeting. In that statement, Trump Jr. indicated that the meeting had been "primarily" about the issue of the adoption of Russian children by Americans.

Amid public uproar over the meeting, the president's son was forced to release follow-up statements, ultimately acknowledging that the meeting's true purpose had been to get dirt about Hillary Clinton from a lawyer he had been told was working for the Russian government.

At the time, in July 2017, Trump offered a similar comment to the one he made on Sunday, dismissing the meeting with a Russian lawyer promising dirt on his political opponent as no big deal.

"Most politicians would have gone to a meeting like the one Don jr attended in order to get info on an opponent," Trump wrote on Twitter. "That's politics!"

The Post reported a few weeks later that Trump Jr.'s initial misleading statement had been "dictated" by Trump.

The president's attorneys at first denied Trump's involvement in drafting the response to the Times, but months later, in a letter intended to explain why Mueller should not interview Trump, they agreed that the president had, in fact, been the author of the statement. They described the statement, which had not mentioned that the Russian lawyer was expected to bring damaging information about Clinton, as "short but accurate."

And they said Trump Jr., Kushner and White House staffers had made a "full disclosure" about that session to Mueller and Congress.

Trump Jr.'s testimony to Congress contained a similar defense as his father's Sunday tweet, indicating that he saw no reason not to accept a meeting that could yield important information about Clinton, even though he was told that it was part of an effort by the government of a hostile power.

"I had bad information at that time," the lawyer said. Sekulow added that he has "no knowledge" of the president's son testifying to the special counsel's grand jury or being told that he is a "target," which is an official designation the Justice Department would use to tell someone that they are likely to be indicted.

In addition to weighing in publicly on the Trump Tower meeting, the president also unleashed angry tweets directed at the news media Sunday morning from his 11-day working vacation in Bedminster, New Jersey.

In one tweet, he declared the media the "Enemy of the People" and accused outlets of sowing division and distrust. "They can also cause War!" Trump wrote. "They are very dangerous & sick!"

In another, he expressed frustration with both the media and Mueller's probe. "Too bad a large portion of the Media refuses to report the lies and corruption having to do with the Rigged Witch Hunt - but that is why we call them FAKE NEWS!"