Did Bruce Springsteen kick a hole in the Berlin Wall? 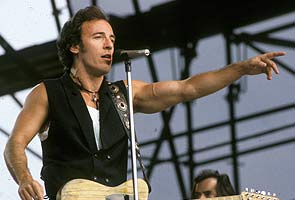 Berlin: Twenty-five years ago this week, US rock legend Bruce Springsteen played to an estimated 300,000 East Germans thirsting for freedom, a spectacular event that some now argue may have helped topple the Berlin Wall.

The anniversary of the July 19, 1988 show in communist East Berlin has prompted a new book, a documentary, talk shows and wide media coverage looking back at what was by all accounts a magical summer night.

The Boss arrived in a country where millions were already yearning for change after 27 years as virtual prisoners of a Stalinist state whose border guards had shoot-to-kill orders.

The writing, as it's said, was on the Wall.

But a rip-roaring concert by who was then arguably the world's biggest rock star, coupled with a stirring message about an "end to all barriers", lend weight to the tantalising theory that Springsteen kicked even a small hole in the Berlin Wall.

"Whether you believe that Springsteen's epic concert contributed to the movement that brought down the Berlin Wall depends to a certain degree on whether you believe in the power of rock'n'roll," Berlin-based US journalist Erik Kirschbaum writes in his book "Rocking the Wall: The Berlin Concert That Changed the World".

A new documentary for German public broadcaster MDR, "My Summer '88", describes a kind of arms race of pop music at the time in which East and West faced off to draw the biggest names just as glasnost brought a wind of change.

West Berlin came out swinging with Pink Floyd, Michael Jackson and David Bowie all playing within earshot of East Berlin, where security forces arrested fans who thronged too close to the despised Wall.

The communist youth organisation tried to placate a disaffected generation with events featuring Springsteen, Depeche Mode, Joe Cocker and James Brown when it became clear to the functionaries that local talent could not compete with global superstars.

However New Jersey's favourite son had to be made palatable to the old guard, despite Springsteen's image as a hero of the working class, so organisers tried to call his show a "Solidarity Concert for Nicaragua".

The Boss, 38 at the time, baulked and the concert at a cycling race track was almost cancelled until roadies ripped down the offending sign. However tickets for the show, cherished in scrapbooks for a quarter-century, bear the slogan.

Fans not lucky enough to get tickets massed at the venue hours before the performance and eventually crashed through the fences - a thrilling moment of unprecedented defiance.

As the show kicked off, Springsteen ran through a few hits before electrifying the crowd with "Born in the USA". Audience members, to his surprise, sang along as they waved homemade American flags.

After playing for more than an hour to rapturous fans, Springsteen pulled out a crumpled note.

"It's great to be in East Berlin," he began in German, which he had phonetically transcribed from a translation given to him by his chauffeur.

"I'm not for or against any government. I came here to play rock'n'roll for you in the hope that one day all barriers will be torn down," he said, before launching into the Bob Dylan song "Chimes of Freedom".

Despite his thick American accent, the massive crowd got the message.

"Everyone knew exactly what he was talking about - tearing down the Wall," Joerg Beneke, an East German farmer there that night, told Kirschbaum.

"That was the moment some of us had been waiting a lifetime to hear."

Less than 16 months later, the Berlin Wall would fall in a bloodless revolution.

Berlin daily Der Tagesspiegel said of Springsteen's four-hour serenade: "It was like a brief embrace with the Statue of Liberty."

And Springsteen himself told an audience in the east German city of Leipzig this month that it was the biggest crowd he ever entertained.

The documentary's directors Carsten Fiebeler and Daniel Remsperger tracked down the woman Springsteen helped on stage to groove to "Dancing in the Dark" with him, Heike Bernhard.

Bernhard, now a management consultant, said she has never washed the t-shirt she was wearing that night.

"Springsteen's mere presence in East Berlin was a tacit message to a lot of East Germans that more might be possible in their lifetime," Kirschbaum quotes Jochen Staadt, a historian at Berlin's Free University, as saying.

"People who saw the concert live or on TV thought... 'If that can happen here now, maybe more will happen here later'."
Comments
Bruce Springsteen