"I promise you this tonight: I am going to the Senate to work for all of Georgia," Warnock said in a livestream to supporters. 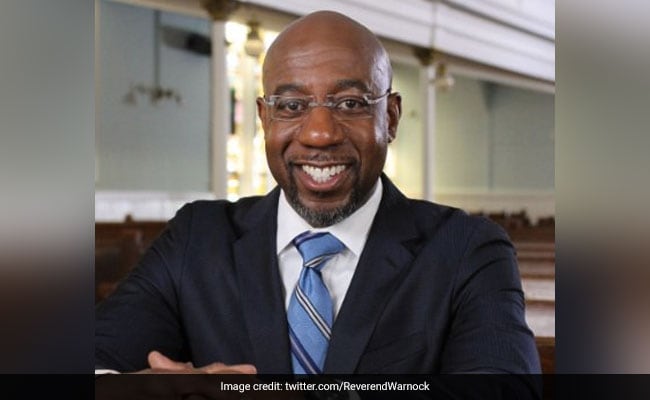 Joe Biden's Democratic Party took a giant step Wednesday towards seizing control of the US Senate as they won the first of two Georgia run-offs, hours before Congress was set to certify the president-elect's victory over Donald Trump.

Reverend Raphael Warnock's victory, projected by multiple US networks overnight, capped a grueling nine-week runoff campaign and puts Georgia's other knife-edge race in the spotlight for its potential to impact the balance of power in Washington.

"I promise you this tonight: I am going to the Senate to work for all of Georgia," Warnock said in a livestream to supporters.

Should Republicans lose the second race it would be a political debacle just hours before Trump is expected to suffer another bitter blow when Congress affirms Biden's Electoral College victory.

Multiple Republicans have signaled they will try to block the certification of the vote.

But their numbers appear slim and the House and Senate are all but guaranteed to reject the effort and certify the Electoral College results.

Warnock, 51, made history as just the third African American to win a Senate seat from the South. He defeated Kelly Loeffler, a 50-year-old businesswoman appointed to the Senate in December 2019.

In the second race, Democrat Jon Ossoff's campaign manager said in a statement that once all votes are counted they "fully expect" Ossoff will have defeated his Republican opponent.

With 97 percent of precincts reporting, Ossoff edged out to a 0.22 percent lead, and analysts have said he was well placed to win, with outstanding votes coming from Democratic-leaning regions such as Atlanta.

Such results would be a major political upset in a GOP bastion, a southern state that has been reliably Republican for two decades but which Biden won in an upset on November 3 as he marched to victory against Trump in the presidential race.

It would also send reverberations through Washington and the nation, as it would essentially hand Biden's Democrats the levers of power in the executive branch and both chambers of Congress.

With 97 percent of precincts reporting, Warnock was ahead by 46,551 votes out of nearly 4.4 million cast, or one percent.

Loeffler however refused to concede. "It's worth it for this election to last into tomorrow, we're going to make sure every vote is counted," she told supporters.

Democrats need both candidates to prevail in order to snatch the Senate from the Republicans. If Perdue holds on to win, Republicans preserve their Senate majority.

"Georgia -- The nation is looking to you to lead us forward," tweeted President-elect Biden earlier on Tuesday.

"The power is in your hands," wrote the 78-year-old Democrat, who like Trump visited the Peach State to rally supporters on the eve of the vote.

Georgia was voting during a week of high political tensions, with Trump desperately scheming to reverse his election loss.

Later Wednesday, Vice President Mike Pence is to preside over a joint session of Congress to certify the Electoral College vote that confirmed Biden as the winner of the White House.

Trump is planning to address a rally near the White House in protest at the certification, with hundreds of supporters in red "Make America Great Again" caps already gathered downtown amid a heavy police presence, as shop owners, fearing unrest, boarded up windows.

Trump has urged Pence to "reject fraudulently chosen electors" -- a move the vice president has no legal authority to make -- while dozens of House Republicans and 12 Senate Republicans have separately said they will raise objections to certification.

The move lacks sufficient support and is doomed to fail.

Democratic victories in Georgia -- where a record three million-plus people voted early amid the coronavirus pandemic -- would break the runoff winning streak that Republicans have held in the statewide races since 1992.

Robert Lowe, a 74-year-old retired improv comedian, called it "the most important election in my lifetime," after casting his ballot at an Atlanta church for the Democrats.

If Republicans retain control of the Senate there will be "continued obstruction" in Washington, Lowe told AFP.

Voting figures in several Georgia counties showed Republican slippage against Trump's numbers from November, which could spell bad news for Loeffler and Perdue if that trend continues.

"It turns out when your coalition depends so much on one person (Donald Trump) driving turnout, there are some big downside risks when that person isn't on the ballot," tweeted Dave Wasserman, an expert on congressional races and editor of the nonpartisan Cook Political Report.

Trump's get-out-the-vote rally in Georgia Monday came a day after The Washington Post published a recording of a phone call in which the 74-year-old president pressured Georgia officials to reverse the certified vote of November's election and hand him victory in the state.

On the tape, Trump is heard telling Georgia Secretary of State Brad Raffensperger he wants to "find 11,780 votes" -- one more than Biden's margin of victory.