US Defence Secretary Mark Esper advocates for strengthening ties with nations like India in the midst of a Indo-Pacific power competition with China. 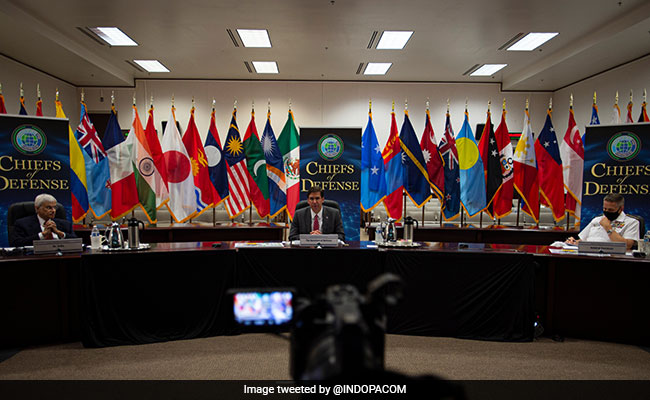 The Indo-Pacific is the epicentre of a "great power competition" with China, who wants to project its power globally, US Defence Secretary Mark Esper said as he underlined America's efforts to strengthen ties with partners like India to get Beijing to respect the international rules-based order.

Mr. Esper in his keynote address to the Daniel K Inouye Asia-Pacific Center for Security Studies in Hawaii said that to advance the agenda of the ruling Chinese Communist Party, the People's Liberation Army (PLA) continues to pursue an aggressive modernisation plan to achieve a world-class military by the middle of the century.

"This will undoubtedly embolden the PLA's provocative behaviour in the South and East China Seas, and anywhere else the Chinese government has deemed critical to its interests," he said on Wednesday.

China is engaged in hotly contested territorial disputes in both the South China Sea and the East China Sea.

Beijing claims almost all of the highly contested 1.3 million square miles of the South China Sea as part of its own territory. China has been building military bases on artificial islands in the region also claimed by Brunei, Malaysia, the Philippines, Taiwan and Vietnam.

Unlike America's Armed Forces, the PLA is not a military that serves its nation or a Constitution; rather, it serves a political entity, the Chinese Communist Party, in its attempts to undermine rules and norms across the globe, Mr. Esper said.

"In fact, China's global ambitions include establishing a security presence at strategic access points, such as its base in Africa, to enhance its ability to project power globally, and across all domains," Mr. Esper said.

Mr. Esper said that the Indo-Pacific faces some of the world's most dynamic security challenges, including a defiant North Korea; violent extremism; and a host of transnational threats such as piracy, human and arms trafficking, natural disasters, and now a global pandemic.

"But most importantly, the Indo-Pacific is the epicentre of great power competition with China," said the US Defence Secretary.

In addition to strengthening ties with allies, Mr. Esper said that the US is also looking to expand its engagement with new and emerging partners throughout South and Southeast Asia.

"For instance, we have upgraded defence relationship with India to a Major Defence Partnership, and we held our first-ever joint military exercise with them last year, along with combined naval exercises earlier this summer," he said.

"Additionally, this past spring, we conducted the second-ever US carrier visit to Vietnam in over four decades, a sign of our deepening relationship," he added.

The United States and its allies have taken decisive action to counter China's attempts to manipulate, disrupt, and undermine the technological edge, namely by denying access to its high-risk 5G vendors, something Japan, Australia, and New Zealand did early on.

"I continue to encourage all like-minded partners to carefully consider their choices regarding telecommunications infrastructure, and assess the long-term, collective risks of using Chinese state-backed vendors," he said.

As the Trump administration continues to implement its Indo-Pacific strategy, the US needs its allies and partners to contribute in ways that are fair and equitable, he said.

"We need them to pursue close alignment in policies that uphold a free and open order and reject decisions that would benefit malign actors to our collective detriment," Mr. Esper said. "And, we need them to make the necessary investments to improve their capabilities so that, together, we can safeguard our interests, strengthen our readiness, and defend our sovereignty and values."

He alleged that under the leadership of the Chinese Communist Party (CCP), Beijing has repeatedly fallen short of its promises to abide by international laws, rules, or norms despite continuing to reap the benefits of the international system and free markets.

"Beijing's self-serving behaviour, however, is not isolated to just the Indo-Pacific region," he said.

"Increasingly, our like-minded partners around the world are experiencing the CCP's systematic rule-breaking behaviour, debt-backed economic coercion, and other malign activities meant to undermine the free and open order that has benefitted nations of all sizes China included," Mr. Esper said.

For example, China's illegal, unreported, and unregulated fishing has wrought economic and ecological damage in the Caribbean and Latin America, Africa, the Pacific Islands, and beyond.

"Further, Beijing has failed to uphold its obligations under the World Trade Organisation, and hampered global efforts to control the coronavirus pandemic due to its lack of transparency with the World Health Organisation," he added.

"China seeks to undermine the free and open order itself, which impacts every nation supporting and benefitting from this system. That is why this institution's forward location and unique role on the front lines of our long-term competition here in the Indo-Pacific is so important," he said.

Mr. Esper said that one of the major ways that the US is enhancing interoperability and bolstering its partners' capabilities is through an improved and expanded Foreign Military Sales (FMS) programme.

"We are providing F-35 aircraft to Japan, Seahawk and Apache helicopters to India, and F-16 fighter jets and M1 Abrams tanks to Taiwan, to name a few examples," he said. "Further, we continue to make progress in deepening our defence relationships across the region."