Death Toll Climbs to 5 in Chattanooga Shooting: US Military 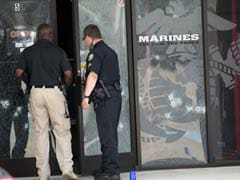 Police officers enter the Armed Forces Career Centre through a bullet-riddled door after a gunman opened fire on the building on Thursday in Chattanooga. (AP photo)

Chattanooga, United States: A US sailor has died of injuries after the shootings on military centers in Chattanooga, Tennessee, the US Navy said today.

He becomes the fifth person to die after being shot Thursday by Mohammad Youssuf Abdulazeez, 24, who opened fire on two military centers. The gunman, a naturalized US citizen born in Kuwait, died in a shootout with police.

The Navy statement said that the latest victim, a Navy petty officer, succumbed to his wounds at 2:17 a.m. (0617 GMT).

The Navy said his name would not be released for the next 24 hours pending notification of next-of-kin.

Four Marines also died in Thursday's attack, which authorities are treating as an "act of terrorism."

Some officials have said they believe the evidence points to an attack inspired by the Islamic State extremist group.

The FBI has asked foreign intelligence agencies to help trace Abdulazeez's movements and activities abroad, and analysts will be tracing his activity on social media, officials said.