President Donald Trump, 73, doesn't like Greta Thunberg, the Swedish climate change activist, their clashes on Twitter over the last couple of years have generated many viral moments on social media. 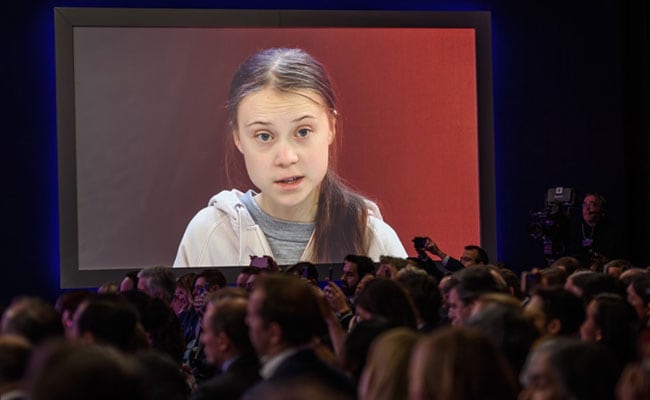 At the world's most exclusive talk-shop of the rich, famous and powerful, a 17-year- old girl was perhaps a bigger draw than the US President. President Donald Trump, 73, doesn't like Greta Thunberg, the Swedish climate change activist, their clashes on Twitter over the last couple of years have generated many viral moments on social media.

Both were in the same building at the same time today, speaking within hours of each other, generating much anticipation on media and social media of another face-off. But those expecting a showdown, remained disappointed.

The climate change activist made some hard-hitting points, but Twitter cheered her on when she refused to answer the panel host's question about dealing with haters. "I would like to say something that I think people need to know more than how I deal with haters," said the teen, who has faced relentless online trolling over the years.

President Trump also decided against taking on Greta Thunberg. To a reporter's question -- "Is Greta right on climate change, Mr. President?" Mr Trump replied, "Oh, I'm a big believer in the environment. The environment to me is very important. Thank you."

But in their speeches there were what appeared to be veiled attacks. While President Trump suggested that the world reject "perennial prophets of doom and their predictions of the apocalypse", the teen scoffed at planting more trees, which had been his suggestion. Planting trees was not enough to address climate change, Greta Thunberg said, adding, "Our house is still on fire".

The last time Donald Trump and Greta Thunberg could have met --- at the UN General Assembly in New York in September - the activist set off a buzz on social media, glaring at the US President as he walked past.

On his part, Donald Trump trolled her on Twitter. Last year, he retweeted a clip of the teen's speech at the United Nations climate summit, in which she had angrily denounced world leaders for failing to address climate change.

"She seems like a very happy young girl looking forward to a bright and wonderful future. So nice to see!" his tweet read.

He even responded to her being named Time's 2019 person of the year. "Greta Thunberg should "work on her Anger Management problem, then go to a good old fashioned movie with a friend! Chill Greta, Chill!" President Trump had tweeted.

Immediately afterwards, Greta Thunberg changed her Twitter bio to:  "A teenager working on her anger management problem. Currently chilling and watching a good old fashioned movie with a friend."

In earlier interviews, she had refused to meet the US President, saying she would not like to "waste time", as he would not listen to her.