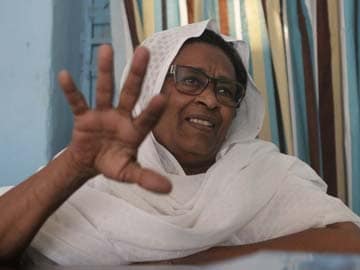 They took his life but Taha's message of a tolerant Islam and equality for all Sudanese lives on among a devoted and intellectual group of followers led by his daughter Asma Mahmoud Muhammad Taha, 67.

She says the time is now right to raise their voices, following 25 years of rule by "fundamentalist" Muslims who took power after earlier supporting former president Jaafar Nimeiri, whose courts sentenced Mr Taha to death.

"These people are distorting Islam. This is not Islam. We are going to show people what true Islam - according to Ustaz ("respected religious teacher" Taha) - what true Islam means," the bespectacled former translator said in an interview at the mud and wood home where Mr Taha lived and worked.

His comments about democracy hang on the walls. "He was really a great man," said Farouk Mohammed Ibrahim, 83, chairman of the Sudanese Organisation for the Defence of Rights and Freedoms.
"He was a very peaceful man. He never raised a stick or anything against anybody."

Some of Mr Taha's ideas were odd, Mr Ibrahim admitted, but his efforts to synthesise "faith and reason" offered a solution for a troubled Sudan and to the conflict between secularism and fundamentalism in the wider world.

"I think his ideas are very badly needed now," said Mr Ibrahim, a former Communist Party member. "They bring a perfect compromise between religion and the secular state."

Dozens were killed in protests which came at a time when the regime is struggling with internal dissent, economic crisis and multiple armed insurrections.

Bashir took power in a 1989 military coup backed by the powerful Islamist Hassan al-Turabi, whose influence had grown under Nimeiri.

Mr Taha had forecast not only the fundamentalists' seizure of power but also the divide it would create within Sudan, his daughter said.

According to Mr Taha's "Second Message of Islam", its laws in the modern era need to evolve "so as to construct a good society where democracy and socialism are reconciled, and where social equality prevails."

That kind of society, coupled with complete submission to God, leads to absolute individual freedom in this "scientific" phase of Islam, he argued.

"The age-old dream of the human caravan is not to send astronauts in their orbit into outer space... it is to send its individuals - every single individual - in his orbit of self-realisation," Mr Taha wrote.

He penned more than 30 books in a blue-painted room that is preserved as a museum, with an old dial telephone on a stand next to a Koran. His smiling portrait hangs over the door.

The house and its small courtyard on a quiet dirt road in Khartoum's twin city of Omdurman serve as a "cultural centre" and gathering place.

Before his execution on January 18, 1985, at the age of 76, Taha had criticised Nimeiri's imposition of Islamic sharia law which imposed amputations and other harsh punishments.

Mr Taha said the poor were being unfairly targeted. On the morning he was hanged at Kober Prison, Asma Mahmoud, then in her late 30s, waited without tears at an aunt's house nearby. "We were trying to be calm, quiet, because we knew this is what our father wants us to be," she said.

"When they pulled up the hood from his face he looked at his executors and the judges, and he just smiled on them," Asma Mahmoud said, citing witnesses.

Nimeiri was overthrown in a popular uprising three months later.

Mr Taha's death sent into abeyance his persecuted movement, which numbered about 1,000 devotees. Asma Mahmoud herself fled to the United States for several years.

"At some point you feel that there is no hope of doing anything in this country, the country that kills its thinkers and the good people," she said, explaining that it took years for her to recover before trying to revive the party.

It will not be easy, she said. That very morning, a state security officer had visited to question them, and her father's books are banned in Sudan.

"We need a genuine democracy, where all people share power and all people have the right to speak," with freedoms based upon constitutional laws, she said.

Many had misunderstood the movement's ideas, or viewed it as elitist.

They are a "small, isolated group", said Mekki Elmograbi, a newspaper columnist and member of the ruling National Congress Party.

Promoted
Listen to the latest songs, only on JioSaavn.com
Elections have been announced for next year but Asma Mahmoud said the Republicans would not take part, according to Mr Taha's wish, until a majority of people had accepted their views.

"We want to convince people... This is the right way of changing their lives," she said. "I'm devoting the rest of my life to this job."