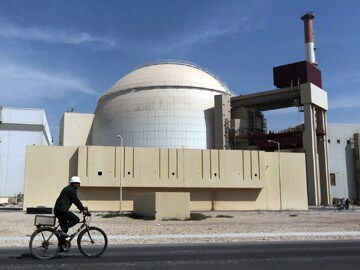 A man on a bicycle passes a nuclear power plant in Iran.

Tehran: Experts from Iran and the P5+1 group of world powers have chosen January 20 to begin implementing the Geneva deal on Tehran's nuclear programme, IRNA news agency said on Wednesday.

"One of the main proposals is to begin applying the agreement from January 20," the agency cited Hamid Baeedinejad as saying.

"There is agreement in principle on this date, which has yet to be approved by the politicians," he said.

Baeedinejad, who heads the Iranian delegation of experts, had already been reported on Tuesday by the ISNA news agency as saying the deal should be implemented in late January.

Experts from Iran and the so-called P5+1 -- the United States, Britain, France, Russia and China plus Germany -- have been holding technical talks on implementing an agreement reached November 24 on Iran's controversial nuclear ambitions.

The interim deal requires that Iran freeze or curb its nuclear activities for six months in exchange for some sanctions relief while the two sides try to reach a comprehensive agreement.

Baeedinejad said on Wednesday that "two or three issues of a political nature must be resolved at political levels", without elaborating.

Promoted
Listen to the latest songs, only on JioSaavn.com
Western nations and Israel have long suspected Iran is covertly pursuing a nuclear weapons capability alongside its civilian programme, charges denied by Tehran, which insists its uranium enrichment is for purely peaceful purposes.