Crude videos aboard an aircraft carrier 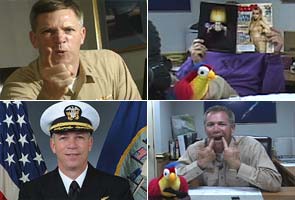 New York: The videos resemble something a college fraternity could have put together as a joke and posted on YouTube. There are scenes showing women showering together, frequent sexual references and a number of antigay slurs and vulgarities.

But instead of a college joke or an amateur YouTube production, the videos -- created about four years ago and now becoming public -- appear to be the work of a man who is currently the commanding officer of the Navy's nuclear-powered aircraft carrier Enterprise, based in Norfolk and weeks away from deploying. The man, Capt. Owen Honors, reportedly not only orchestrated the making of the raunchy videos, but also starred in them and filmed them aboard the Enterprise with government equipment while the carrier was deployed during the wars in Iraq and Afghanistan.

The videos were splashed across the Internet over the weekend, and are now at the center of a Navy investigation.

According to The Virginian-Pilot in Norfolk, which obtained the videos and posted them on its Web site, Captain Honors made the videos in 2006 and 2007 to entertain and boost the morale of sailors aboard the carrier. The videos were filmed with cameras and equipment from the carrier's public affairs office, and were shown at least once a week on closed-circuit television throughout the ship. Captain Honors at the time was the carrier's executive officer, or "XO," but he later became its commanding officer.

In scenes from one of the videos, Captain Honors states that his goal is to entertain the crew, then goes on to curse and make lewd gestures. At one point he turns to the camera and says, "Let's get to my favorite topic -- something foreign to the gay kid over there -- chicks in the shower."

The video then shows two female sailors showering together with a cardboard cutout of Captain Honors, and two male officers also taking a shower together. The videos are rife with sexual subject matter and crude scenes. Throughout the video, Captain Honors uses an antigay slur to refer to some members of the crew and makes light of the fact that the material apparently offended some sailors.

"Over the years I've gotten several complaints about inappropriate material during these videos, never to me personally, but gutlessly through other channels," he says at one point. "This evening, all of you bleeding hearts, why don't just go ahead and hug yourself for the next 20 minutes or so, because there's a really good chance you're going to be offended."

Promoted
Listen to the latest songs, only on JioSaavn.com
Captain Honors could not be reached for comment on Sunday. But in a written statement, the Navy said the videos were "clearly inappropriate."

"Production of videos, like the ones produced four to five years ago on U.S.S. Enterprise and now being written about in The Virginian-Pilot, were not acceptable then and are not acceptable in today's Navy," the Navy's statement said. "The Navy does not endorse or condone these kinds of actions."
Comments
crude videosvideos on aircraft carrierCapt. Owen Honors