Stringent lockdown has bene imposed in Shanghai by the China government to check the spread of COVID-19 infection. 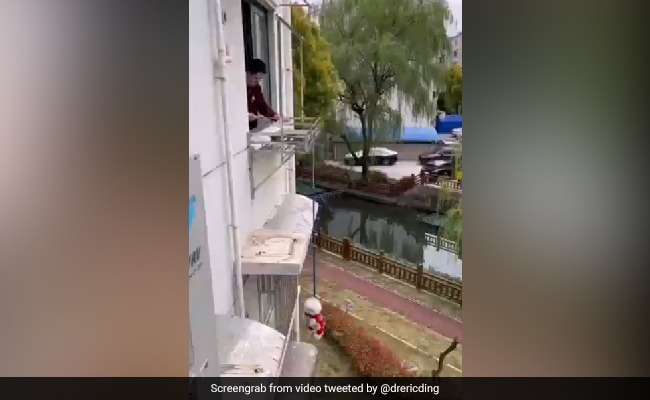 The dog being lowered by a family in Shanghai.

The stringent lockdown measures imposed by China in Shanghai have made lives difficult for residents of the city, particularly dog owners. The government has locked down most of the city's 26 million residents, barring them from leaving their homes.

So how are the residents dealing with the harsh lockdown imposed in the city? A series of videos posted by American public health scientist Eric Feigl-Ding on Twitter shows how life has come to a halt in one of the most populous cities on the planet.

One of the videos also shows an innovative idea being used by a family to walk the dog. It shows a resident lowering his Pomeranian dog from the third floor house using a long rope.

How to walk your dog ???? in Shanghai during a hard lockdown. pic.twitter.com/dR4Y9viIzk

As the dangling dog reaches the ground, the incredibly long leash allows it to roam around the building for some time. It is then pulled back up by the owner. The video has been viewed more than 52,000 times.

"This is NUTS," said a user. "I don't know what to say about this ... it's either innovative or disgusting," added another.

Another video shows a four-legged robot, which looks like a dog, patrolling the streets and making COVID-related announcements.

The heath expert has also posted a "mini glimpse" of the "ghost town" that Shanghai has now become. The video shows eerie silence in Shanghai, with no vehicles passing through the main road except ambulance, that too, occasionally. It also has a shot of a huge array of isolation centres next to a cluster of housing societies.

4) Most people can't fathom how dystopian this video is. I was born in Shanghai - it is honestly one of the most overcrowded cities on earth. Yet look at the streets… https://t.co/6yMIG6Hn5y

"Most people can't fathom how dystopian this video is. I was born in Shanghai - it is honestly one of the most overcrowded cities on earth. Yet look at the streets..." Eric Feigl-Ding says in another tweet.

Late on Thursday, the city government in Shanghai extended an existing lockdown in eastern districts, just as western parts of the city were shut down.

The fresh guidelines say people will now be required to stay home as long as it takes to control the coronavirus outbreak. Public transport in most of the city has been suspended, while businesses considered non-essential, like restaurants and shopping malls, have also been closed.

The lockdown began on Monday and is designed to stop an outbreak of the highly transmissible Omicron variant.

China's outbreak is small by global standards. But Shanghai is accounting for three out of every four local asymptomatic COVID cases across the country.