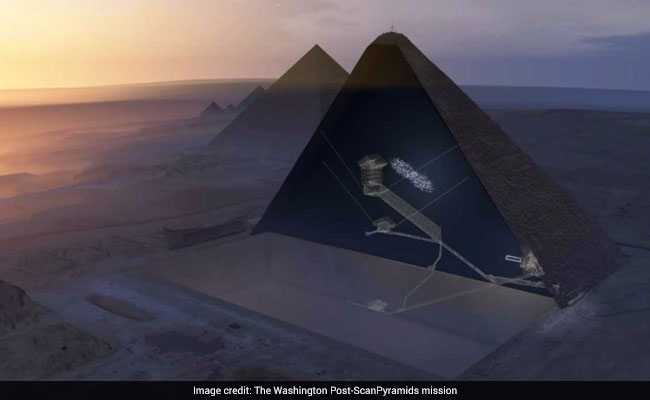 A 3-D rendition of the Great Pyramid, showing the location of the void as a cluster of white dots

High above Egypt and everywhere else, cosmic rays bombard the atmosphere.

The rays consist mostly of hydrogen nuclei, but they finish their interstellar journey with a bang, splitting into a shower of smaller elementary particles when they hit the sky. Negatively charged particles called muons wink into existence and out again within millionths of a second, shooting downward at nearly the speed of light. Each minute, muons rocket through your skull by the hundreds. Muons are so small that they're harmless. They're also tough to detect.

But they're not undetectable to physicists, who can use the particles' trajectory to peer through otherwise impenetrable substances, the way an X-ray reveals a fractured bone.

The 455-foot-tall Great Pyramid, or Khufu's Pyramid, is the last of the Seven Wonders of the Ancient World still standing. The newly discovered void is nearly 100 feet long. The cavity is above and similar in size to the Grand Gallery, a passage through the pyramid's belly that leads to the King's Chamber.

"They really hit pay dirt," said Roy Schwitters, an expert in experimental high-energy physics at the University of Texas at Austin who was not involved with this project. "It's a very convincing story they have."

The mission to probe the pyramids of Giza, named ScanPyramids, began in 2015. It is a joint program between Cairo University and the French nonprofit HIP Institute, with guidance from the Egyptian Ministry of Antiquities. In the new discovery, which the journal Nature published Thursday, scientists from those institutions teamed up with Japanese physicists and brought three types of muon detectors to examine the Great Pyramid.

Stone absorbs muons' energy in ways that pockets of air do not. "When searching for a void in one location, what you look for is a muon excess in that direction," said Arturo Menchaca-Rocha, a physicist at the National Autonomous University of Mexico. Menchaca-Rocha, not a member of this project, has used cosmic radiation to probe an ancient Mesoamerican pyramid. "Muon tracking is what helps locate and image the void's shape."

One type of muon detector, called a nuclear emulsion film, catches muons as lines of little black globules. The film is "developed by the muon, so to speak," Schwitters said; muons create cross-sections the way light creates the photos on your iPhone. (But muons are even better than light, he said, because the particles "tell you where they come from, and they tell you which direction" they came from, too.) Independent teams were assigned to each of the three muon detectors arrayed around the Great Pyramid. "We came to the conclusion that all of the teams have been able to detect this," Mehdi Tayoubi, president of the HIP Institute, told reporters on Wednesday.

"If you see the same signal with different technologies, it increases your confidence that what you see is real," said Konstantin Borozdin, a physicist who worked on muon detection at Los Alamos National Laboratory in New Mexico and is vice president at Decision Sciences, a California-based security company that uses muon technology to scan vehicles for hidden radioactive cargo.

Muon detectors have probed volcanic chambers and Fukushima's nuclear disaster zones. The detectors can distinguish rock slabs from a void from water. ScanPyramids is not the first archaeological application of this technology. In the 1960s, a team led by Luis Alvarez, the University of California at Berkeley physicist who predicted the existence of a dinosaur-killer asteroid, used muon technology to look for voids in the Pyramid of Khafre, the second-largest Egyptian pyramid after the Great Pyramid. That pyramid has no secret chambers, Alvarez declared.

But Alvarez and his colleagues did not examine the Great Pyramid, which still had secrets to spill. The likelihood that the newly discovered void was a technical error, the authors of the new study said, was less than 1 in 3.5 million.

Despite their confidence that a void exists, the researchers know little beyond its dimensions. Muon detection, or tomography, can sketch only a rough outline of the void. The chamber may be horizontal, or at an incline parallel to the Grand Gallery. It may be a single structure or smaller rooms in sequence. It may be as stocked with treasures as Al Capone's vault.

The void's discoverers, none of whom were experts in Egyptology, were reluctant to speculate on the nature of the void. Nor did the physicists say whether there were plans to access the chamber.

"This structure is not accessible," Tayoubi said. "This void was hidden, I think, during the construction of the pyramid."

Muon-based technology is still rare in archaeology. It is expensive and time-consuming. An array of detectors can run into the hundreds of thousands of dollars, a significant departure from typical archaeology budgets. The exposure time for the nuclear emulsion film used around the Great Pyramid was measured in months. Applying particle physics to archaeology requires a certain level of technical sophistication. "Indiana Jones wouldn't be doing muon tomography," Schwitters said.

Yet muons may play an increasing role in future discoveries. Schwitters is in the process of creating detectors that run on solar energy and are rugged enough to survive the jungles of Belize, where he plans to examine Mayan pyramids.

"They're coming from the most energetic cosmic events in the universe. They're a piece of nature," Schwitters said. "You're using elementary particles to do something you can't do any other way."