Saudi Arabia coronavirus: Campaigners have called on Saudi Arabia to reform its long-criticised labour policy and offer an amnesty to poor debt-ridden workers trapped in the country 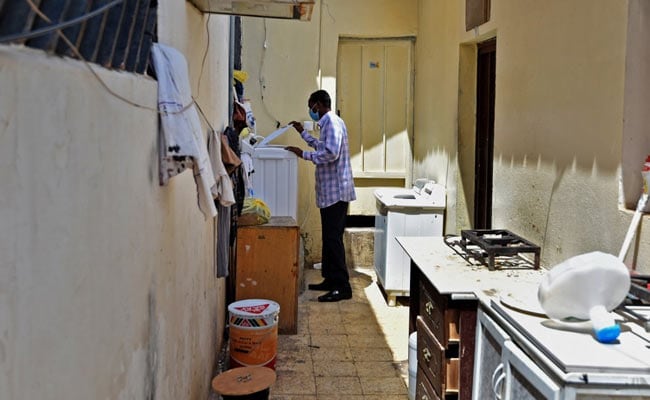 Jobless and broke, Sudanese electrician Hatem is stranded in limbo in Riyadh like countless other illegal workers, but he hopes the fast-spreading coronavirus will offer a chance for escape.

The pandemic has laid bare what activists call systemic injustices roiling the lives of blue-collar foreign workers in Saudi Arabia -- overcrowded housing, exploitative employers and a lack of effective recourse.

Campaigners have called on Saudi Arabia to reform its long-criticised labour policy and offer an amnesty to poor debt-ridden workers trapped in the country, a predicament that risks fuelling the pandemic.

The problem is rooted in the "kafala" sponsorship system, described by critics as a modern form of slavery that binds workers to their Saudi employers, whose permission is required to enter and exit the kingdom as well as to change jobs.

Employers also hold enough sway to render their status illegal, according to activists and interviews with four undocumented workers, including Hatem, a 45-year-old electrician living in hiding in Riyadh to avoid arrest.

"My six kids, my old mother, my sister in Sudan... are living in a difficult situation, but I live in much worse conditions," Hatem told AFP in his squalid Riyadh apartment, which he shares with other workers.

"The sponsorship system is very unjust," said Hatem, who arrived in 2016.

Saudi Arabia, home to around 10 million expats, has expelled hundreds of thousands of illegal workers in recent years.

But many like Hatem who are stuck in a debt trap are not permitted to leave before settling their dues, even as kafala curbs prevent them from legally earning their way to freedom.

"The Saudi government should offer an amnesty for irregular migrants to regularise their status or return to their home countries," Annas Shaker, a research fellow at the advocacy group Migrant Rights, told AFP.

Holding back such workers, many of whom are forced to go into hiding, risks fanning the pandemic, observers including Shaker warned.

Saudi Arabia has reported over 200,000 infections and nearly 2,000 deaths. Hospital sources say doctors and nurses are among those dying and intensive care units are stretched beyond capacity.

Hatem, who scrapes by thanks to the kindness of strangers, has implored Sudan's embassy in Riyadh to push authorities to grant him the exit visa he needs to leave.

A South Asian official told AFP he had received similar pleas for exit visas from debt-saddled subcontinent workers stuck in the same predicament, many for years.

In an extraordinary announcement in March, Saudi Arabia offered free coronavirus treatment to illegal workers and promised no retribution if they come forward for treatment.

But after years of what workers call heavy-handed treatment by authorities, the gesture has been met with suspicion.

Three other undocumented workers who spoke to AFP -- two from Egypt and another from Bangladesh -- said they would be unwilling to come forward if they contracted the virus.

One of the Egyptians, a 36-year-old father-of-two, said he could not take the risk after he took on a huge loan to work in the kingdom as a private driver.

"There is no guarantee I will not be arrested," he said.

Kafala persists even after Saudi media reported in February that the government would "soon" abolish the system.

Hatem's nightmare began when his sponsor began demanding a big chunk of his earnings in exchange for renewing his residence permit every year.

Foreign workers say they are often vulnerable to such "extortion" from their sponsors in order to continue working legally after many arrive heavily indebted from their home countries.

Hatem, who also needed to support his large family, said the demand pushed him further into a debt trap as he borrowed heavily to pay his sponsor.

But still, he said, the employer reported him to authorities as "huroob", Arabic for absconding, a status that effectively renders him a criminal at risk of being jailed and deported.

The expiry of his residence permit makes his presence illegal, making it impossible to access basic services or legally find work to repay his debt, which runs into thousands of riyals.

"For hundreds of thousands of migrants in Saudi, irregularity is not a choice," said Shaker, adding that sponsors can declare workers huroob "with a touch of a button online" or choose to wilfully avoid renewing permits.

"They are pushed to irregularity due to inadequate labour and migration policies that give employers great sway over them."