COVID-19: Thailand said they will mix a first dose of Chinese-made Sinovac vaccine with a second dose of AstraZeneca to try and achieve a "booster" effect in six weeks instead of 12. 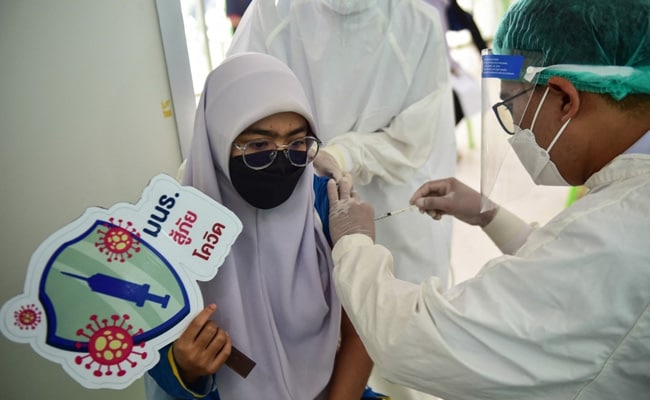 Thailand on Tuesday defended mixing two different COVID-19 vaccines to battle a surge in infections, after the World Health Organisation (WHO)'s top scientist warned that it was a "dangerous trend" not backed by evidence.

The kingdom is struggling to contain its latest outbreak fuelled by the highly contagious Delta variant, with cases and deaths skyrocketing and the healthcare system stretched thin.

Authorities said they will mix a first dose of the Chinese-made Sinovac jab with a second dose of AstraZeneca to try and achieve a "booster" effect in six weeks instead of 12.

Thailand's chief virologist Yong Poovorawan said this would be possible by combining an inactivated virus vaccine -- Sinovac -- with a viral vector vaccine such as AstraZeneca.

"We can't wait 12 weeks (for a booster effect) in this outbreak where the disease is spreading fast," he said. "But in the future, if there are better, improved vaccines... we will find a better way to manage the situation."

His comments come a day after the WHO's chief scientist Soumya Swaminathan called the strategy a "dangerous trend".

"We are in a bit of a data-free, evidence-free zone as far as 'mix-and-match'", she said.

Thailand has reported more than 353,700 coronavirus cases and 2,847 deaths -- the bulk of them detected since the latest wave kicked off in April from an upscale Bangkok nightlife district.

Healthcare workers were the first in line to receive Sinovac, but authorities said Sunday nearly 900 medical staff -- most of them vaccinated with that shot -- got COVID-19. They will now also get an AstraZeneca or Pfizer-BioNTech booster shot, authorities said.

Virus hotspot Bangkok and nine other hard-hit provinces are now under tougher restrictions that include a night-time curfew and a ban of gatherings over five people.

The administration of Premier Prayut Chan-O-Cha has come under vociferous criticism for its handling of the pandemic, from accusations of vaccine mismanagement to the lack of government compensation for affected sectors.

On Tuesday, his cabinet approved a 30 billion baht ($920 million) rehabilitation scheme to aid businesses -- including retail, entertainment and construction -- affected by the severe restrictions in Bangkok and nine other provinces.

Residential utility bills such as water and electricity will also be lowered for two months, the cabinet said.