Ramaphosa acted after a picture of Stella Ndabeni-Abrahams at the lunch emerged on social media, angering South Africans confined to their homes during the 21-day lockdown that started on March 27 to rein in the coronavirus outbreak. 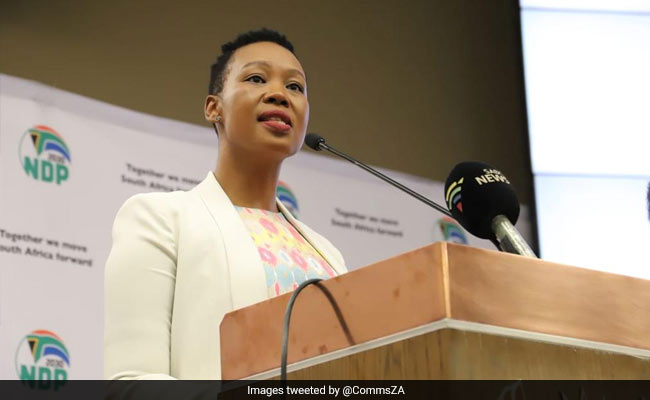 South African President Cyril Ramaphosa put the communications minister on "special leave" for two months on Wednesday and docked a month of her pay for breaking the rules of a countrywide lockdown by having lunch with a former official.

Ramaphosa acted after a picture of Stella Ndabeni-Abrahams at the lunch emerged on social media, angering South Africans confined to their homes during the 21-day lockdown that started on March 27 to rein in the coronavirus outbreak.

According to the rules, people are only allowed to leave their homes for essential tasks like buying food or seeking medical help. Police arrested more than 17,000 people during the first few days of the lockdown, many for violating the rules.

"The president strongly believes that no one, including the minister, is above the law," Ramaphosa's spokeswoman Khusela Diko said. "He says none of us should undermine our national effort to save lives in this very serious situation."

"I would like to convey an apology to ... society at large for breaching lockdown rules put in place to curb the spread of COVID-19," she said. "I regret the incident and am deeply sorry."

The country's largest opposition party, the Democratic Alliance, had called on Ramaphosa to fire Ndabeni-Abrahams and lay a criminal complaint against her over the "lockdown lunch".

Ndabeni-Abrahams has been leading government efforts to lower data prices and increase policy certainty in the telecoms sector, including via the licensing of high-demand spectrum.

She is not the first government minister to break lockdown rules. New Zealand Health Minister David Clark drove his family to the beach during the lockdown there, and Scotland's chief medical officer stood down after breaching the lockdown by visiting her second home.

South Africa has the most confirmed coronavirus cases in Africa, at 1,845 with 18 deaths, but that number is expected to rise as the government recently launched a mass testing drive.

One hotspot for the virus is the St Augustine's hospital in Durban, where Health Minister Zweli Mkhize said on Tuesday that around 48 staff had been infected.

Nomagugu Simelane-Zulu, a provincial health official, said an investigation would be conducted to work out how so many people had been infected at St Augustine's. She said five of the country's 13 deaths were linked to the hospital.

Trade union Hospersa echoed complaints from other unions that there was insufficient protective gear for health workers and called on its members to refuse to work if weren't properly protected.

Health officials have acknowledged shortages of equipment like masks, but they say they have taken steps to address them.

State airline South African Airways said on Wednesday that it was operating cargo flights that would bring in medical supplies like COVID-19 testing kits.

Carmaker Ford's southern African operation said it had started making 57,000 face shields that would be donated to frontline workers.