"Thick darkness has gathered over our squares, our streets and our cities; it has taken over our lives, filling everything with a deafening silence and a distressing void," Pope Francis said 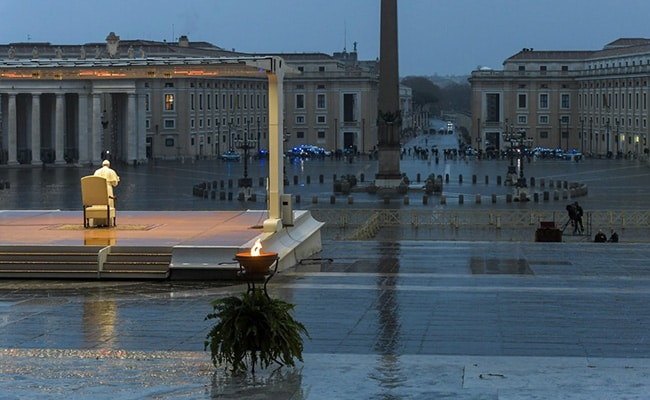 "We find ourselves afraid and lost," Pope Francis said in a homily ahead of the blessing

Pope Francis stood alone in vast Saint Peter's Square Friday to bless Catholics around the world suffering under the coronavirus pandemic, urging people to ease their fears through faith.

"Thick darkness has gathered over our squares, our streets and our cities; it has taken over our lives, filling everything with a deafening silence and a distressing void, that stops everything as it passes by," he said.

In a historic first, the Argentine performed the rarely recited "Urbi et Orbi" blessing from the steps of the basilica to an empty square, addressing those in lockdown across the globe via television, radio and social media.

"We find ourselves afraid and lost," he said in a homily ahead of the blessing, as he stood under a canopy protecting him from a downpour.

He described the coronavirus "tempest" which he said had put everybody "in the same boat".

The hour had come to "reawaken and put into practice that solidarity and hope capable of giving strength, support and meaning to these hours when everything seems to be floundering", he said.

The blessing -- which translates as "To the City (Rome) and the World" -- is usually given on just three occasions: when a pope is elected, and each year at Christmas and Easter.

The pontiff traditionally speaks out against armed conflicts around the globe before delivering the Urbi et Orbi blessing.

But on Friday, the COVID-19 pandemic which has already killed more than 23,000 people was in his sights -- and humanity's errors and lack of faith leading up to the crisis.

"We have gone ahead at breakneck speed, feeling powerful and able to do anything. Greedy for profit, we let ourselves get caught up in things, and lured away by haste," said Francis in his homily.

"We were not shaken awake by wars or injustice across the world, nor did we listen to the cry of the poor or of our ailing planet. We carried on regardless, thinking we would stay healthy in a world that was sick."

Today was not "the time of your judgement," the Pope clarified, but rather a time for people to focus on the important, "a time to separate what is necessary from what is not."

And at the end of the service, Francis granted Catholics the chance to have a rare remission for the punishment of sins.

Earlier this month, when the Italian capital was already in lockdown, Francis made a solitary pilgrimage to two of the city's churches.

At one, he borrowed a crucifix believed to have saved Rome from plague in the 16th century. On Friday, that crucifix was placed in front of Saint Peter's.

"During the plague in the Middle Ages, the Church was the only visible presence in public, through the processions of priests who were supposed to produce miracles," Vatican expert Marco Politi told AFP.

"The Pope wants to recapture a part of that scene and of the collective imagination," he said.

The head of the world's 1.3 billion Catholics is a high-risk subject for the virus himself. Since coming down with a cold late last month, the 83-year-old has remained largely secluded within the Vatican.

Italian media reported that the pope had tested negative for coronavirus after a prelate who lived at his residence -- a guest house in the Vatican -- was hospitalised on Wednesday with the virus.

"The anti-contagion cordon has been tight around the pope for weeks," La Stampa daily wrote.

The Vatican has only officially reported four positive cases of the coronavirus within the tiny city state, without confirming the alleged case in the guest house.