Omicron Spreads In US, Australia With First Locally-Transmitted Cases

The World Health Organization has said it could take weeks to determine whether Omicron is more transmissible and whether it causes more severe infections -- as well as how effective current treatments and vaccines are against it. 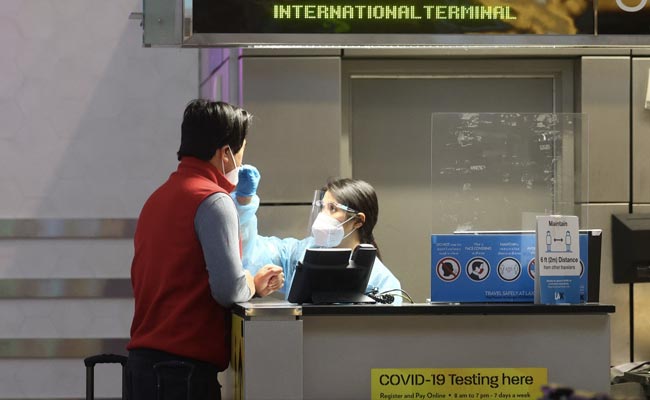 Ten cases of Omicron have so far been confirmed in the United States.

The United States and Australia announced their first locally transmitted cases of the Omicron variant as authorities worldwide rushed Friday to stem the spread of the heavily mutated strain of Covid-19.

The World Health Organization has said it could take weeks to determine whether Omicron is more transmissible and whether it causes more severe infections -- as well as how effective current treatments and vaccines are against it.

But the new variant, first reported by South Africa, has already cast the world's recovery into doubt, with the EU health agency warning it could cause more than half of Europe's Covid cases in the next few months.

More than two dozen governments have now detected cases of the variant -- including India, one of the countries hardest-hit by the coronavirus pandemic since it first emerged nearly two years ago.

A preliminary study by South African researchers suggests the strain is three times more likely to cause reinfections compared to the Delta or Beta strains.

The research, which has not yet been peer reviewed, was described as "very concerning" by Michael Head, a scientist at the University of Southampton.

Ten cases have so far been confirmed in the United States, including five in New York announced Thursday, one in Los Angeles county, and one in Hawaii.

The Hawaii case and one in Minnesota both involved residents with no recent international travel history -- signaling the strain is already circulating inside the country.

"This is a case of community spread," the Hawaii Health Department said.

The cases were reported as US President Joe Biden outlined his plans to battle Covid-19 during the winter, with new testing requirements for travelers and a surge in vaccination efforts.

"It's a plan that I think should unite us," he said.

All incoming travelers will need to test negative within a day before their flights, and rapid tests that currently cost $25 will be covered by insurance and distributed free to the uninsured.

Australia on Friday, too, reported a student with no history of foreign travel had tested positive for the variant.

The case, detected in the country's largest city of Sydney, comes despite a sweeping ban on non-citizens entering the country and restrictions on flights from southern Africa.

And just a day after Singapore reported two cases of the strain, neighboring Malaysia on Friday reported its first infections with the variant.

The case was detected in a foreign student travelling from South Africa, who had arrived in Malaysia on November 19, Health Minister Khairy Jamaluddin said.

The case was only confirmed on December 2, after officials conducted genome sequencing on some samples taken from recent arrivals at Kuala Lumpur airport, he said.

- Restrictions reimposed -
The variant's detection and spread represent a major challenge to efforts to end the pandemic, with several nations already reimposing restrictions many had hoped were a thing of the past.

In Germany, outgoing Chancellor Angela Merkel said large parts of public life would be "open only to those who have been vaccinated or recovered" from Covid-19 ahead of a vote by the country's parliament on mandatory immunizations.

It is not yet clear when the latest measures will go into effect, but the plans include a blanket ban on entering bars, restaurants and cinemas for anyone who is unvaccinated or not recovered from Covid, according to a document signed off by the leaders of the country's 16 states.

The agreement also includes new restrictions on large gatherings and the closure of nightclubs in areas with a weekly incidence rate above 350 infections per 100,000 people.

Fireworks will be banned on New Year's Eve to stop large crowds from gathering, according to North Rhine-Westphalia state premier Hendrik Wuest.

India has yet to impose new blanket international travel bans, but its health ministry earlier this week ordered all inbound travelers from "countries at-risk" to undergo mandatory post-arrival Covid testing, along with the random testing of other international arrivals.

WHO chief Tedros Adhanom Ghebreyesus has warned of a "toxic mix" of low vaccination and testing rates creating a "recipe for breeding and amplifying variants."

And the United Nations said Thursday that the pandemic has pushed tens of millions more people into poverty, estimating that 274 million people would need emergency assistance next year as economies suffer with Covid-19 restrictions.