Watch: What Man Did To Surprise Fiancee After Recovering From Coronavirus In South Africa

Coronavirus lockdown: Film director Dan Mace, 30, made a video of the event that has been viewed more than 250,000 times. 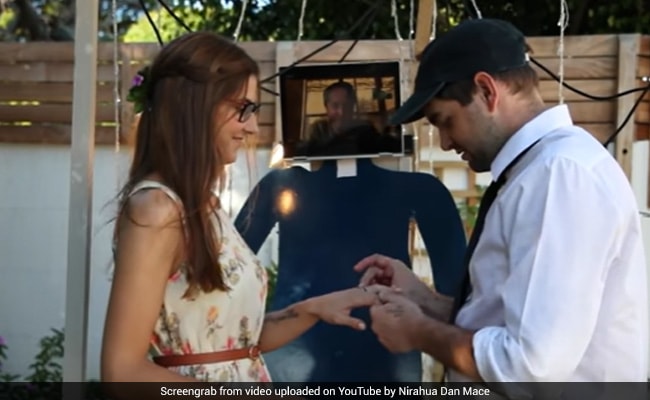 The wedding was postponed after the man tested positive for coronavirus

Undeterred by a coronavirus diagnosis the day he was due to wed and curbs on gatherings that halted the ceremony, a South African has exchanged marriage vows with his bride in their backyard at a makeshift altar he built in his garage.

"It was a really difficult decision having to postpone it. I feel like I am stuck with those nerves of anticipation especially because everything was ready to go," said his fiancee, 27-year-old law student Gabi Mace-Esterhuizen, in the YouTube clip.

The couple had scheduled their wedding for March 21, it was postponed due to his diagnosis and government-imposed restrictions on gatherings to slow the spread of COVID-19. Mace, who has since recovered from the virus, said the curbs and subsequent fuller lockdown on March 26 had brought the couple closer together.

"I really wanted to try to do something ceremonial and sentimental to celebrate that," he told Reuters.

The video shows Mace-Esterhuizen in a floral summer dress, walking to the altar where a friend streamed through a tablet acted as a makeshift minister to conduct a ceremony complete with cardboard cutouts of guests and wedding bands made from guitar strings.

The couple now plan to make their wedding official in December.