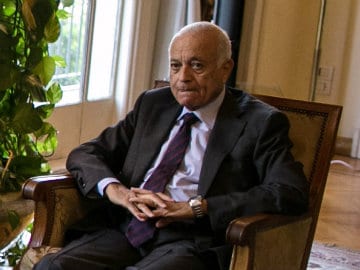 Cairo, Egypt: The head of the Arab League appealed Sunday to its member states to confront "militarily and politically" Islamic State insurgents, an apparent call to arms as the US launched new airstrikes against the group's fighters in Iraq.

Nabil Elaraby's comments come ahead of US President Barack Obama's planned address Wednesday to the American people on his plans to confront the Islamic State group, which now controls a wide swath of territory in Syria and Iraq.

Washington is looking for wide support for its call to take on the Islamic State group, following domestic criticism it was too overly cautious in dealing with the militant group.

Already, NATO forces have agreed to take on Islamic State militants. Support from the Arab League could provide Obama the international coalition he hoped to create to challenge the group.

It wasn't immediately unclear what steps the Arab League would take in supporting action against the Islamic State group.

Elaraby himself noted that the Arab League's 22 members have failed to help each other in the past when facing local armed groups, often because of disagreement among each other over what to do or using the pretext of non-interference to avoid accusation of meddling in each other's affairs. Those challenges include Iraq, as well as the militia violence now tearing Libya apart and other conflicts.

However, expressing frustration at the lack of Arab action, he said some members wouldn't refuse a Western intervention.

Elaraby said what is needed from Arab countries is a "clear and firm decision for a comprehensive confrontation" to what he called "cancerous and terrorist" groups.

"What is happening in Iraq, and the presence of an armed terrorist group that not only challenges the state authority but its very existence and that of other countries, ... is one of the examples of the challenges that are violently shaking the Arab world, and one the Arab League, regrettably, has not been able to confront," he said.

Elaraby said the League has the mechanism needed to provide the legal and political cover for such joint action "to help any Arab country to face the challenges to its security, safety and territorial integrity," including military intervention if needed.

A decades-old joint Arab defense agreement states that members states can initiate help alone or collectively to ward off an attack and restore peace and order by all means, including use of force. Elaraby said an agreement to activate that clause in the 1950 agreement is needed.

Before the Arab League meeting, Elaraby also spoke by telephone to U.S. Secretary of State John Kerry to discuss ways to deal with the Islamic State insurgents.

Meanwhile Sunday, the U.S. said it launched airstrikes around Haditha Dam in western Iraq, targeting Islamic State insurgents for the first time in the country's contested Anbar province. U.S. officials said that while the dam remains in control of the Iraqis, the U.S. offensive was an effort to beat back militants who have been trying to take over key dams across the country, including the Haditha complex.

U.S. Defense Secretary Chuck Hagel, traveling in Georgia, said the Iraqi government had asked the U.S. to launch the airstrikes and that Iraqi forces on the ground conceived the operation.

Anbar has for some time been a contested region between Iraqi forces and Islamic State militants backed by allied Sunni tribes. The situation deteriorated significantly in late December, and the militants took over parts of Ramadi and Fallujah.

The Iraqi government and allied tribes launched an offensive on Jan. 26 to wrest control of the cities back from the militants and sporadic clashes have continued around Fallujah and in some parts of Ramadi, with only limited success by Iraqi security forces. U.S. airstrikes could greatly boost their hand now.

Promoted
Listen to the latest songs, only on JioSaavn.com
Amid fighting in Anbar, the province's governor and the mayor of Haditha were wounded by a roadside bomb, said Faleh al-Issawi, a member in Anbar's provincial council. Gov. Gov. Ahmed al-Dulaimi later tweeted that he had been wounded, though not seriously.