The show of unity was in contrast to the Group of Seven meeting in Quebec City, where US President Donald Trump disowned a joint summit statement 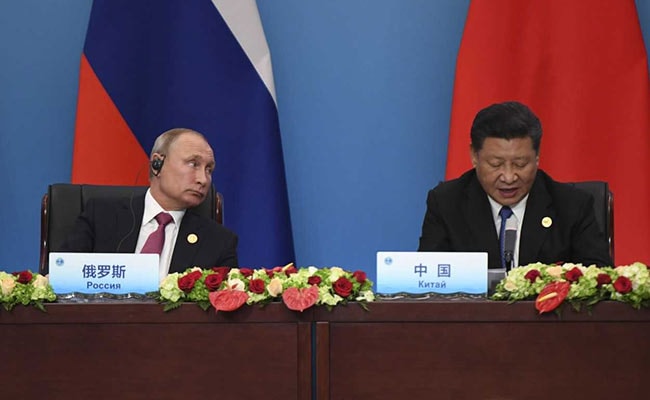 Russia and China may propose a Eurasian economic partnership for all member states. (AFP)

Qingdao, China: The leaders of China and Russia Sunday praised the expansion of their regional security bloc at a summit which put on a show of unity in stark contrast to the acrimonious G7 meeting.

President Xi Jinping gave the leaders of Pakistan and India a "special welcome" to their first summit of the Shanghai Cooperation Organisation (SCO), in the eastern Chinese city of Qingdao, since their countries joined the group last year.

Iran's President Hassan Rouhani, whose country is an observer member, also attended the meeting as he seeks Chinese and Russian support following the US withdrawal from the nuclear deal with Tehran.

Warning that "unilateralism, trade protectionism and a backlash against globalisation are taking new forms", Xi spoke up for the "pursuit of cooperation for mutual benefit".

While never mentioning the United States by name, he added: "We should reject the Cold War mentality and confrontation between blocs, and oppose the practice of seeking absolute security of oneself at the expense of others, so as to obtain security of all."

Xi, whose government is locked in tough negotiations with the United States to avoid a trade war, said World Trade Organisation rules and the multilateral trading system should be upheld to build an open world economy.

"We should reject self-centred, shortsighted and closed-door policies," said Xi, whose own country has been accused of restricting broad access by foreign firms to its huge market.

Addressing the SCO leaders, Russian President Vladimir Putin said the addition of Pakistan and India means that the organisation "has become even stronger".

The show of unity was in marked contrast to the calamitous end to the Group of Seven in Quebec City, after US President Donald Trump disowned a joint summit statement and lambasted Canadian Prime Minister Justin Trudeau as "dishonest" and "weak".

Responding to criticism of Russia in the G7 statement, Putin told reporters that the group should "stop this creative babbling and shift to concrete issues related to real cooperation".

The G7 text made no mention of Russia being invited back into the group despite Trump's support for such a move. Russia was expelled in response to its 2014 annexation of Crimea.

Putin did not miss an opportunity to thumb his nose at the club of leading industrialised democracies, saying that the combined purchasing power of the SCO outstripped the G7.

The People's Daily newspaper, the ruling Chinese Communist party mouthpiece, also took a jab at the group by tweeting two pictures side by side.

The first was the now famous photo of German Chancellor Angela Merkel flanked by leaders such as a furrow-browed French President Emmanuel Macron, all tensely facing off against Trump -- the only one seated, with his arms crossed. 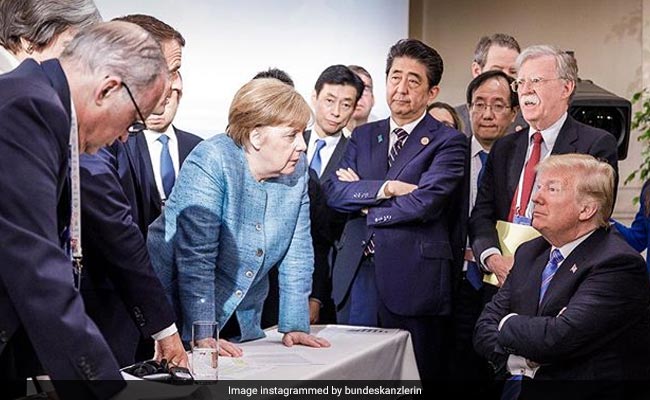 The second depicted Xi at the centre of the SCO leaders striding forward together in smiling unison, a grinning Putin by his side.

While Xi feted his peers with fireworks, SCO members have their own disagreements, with India concerned about China's trade infrastructure project in Pakistan occupied Kashmir. China and India had their own heated border dispute in the Himalayas last year.

But no disharmony was evident during the two-day summit in Qingdao.

Xi touted security cooperation -- the original raison d'etre of the SCO -- and announced that China would open a 30 billion yuan ($4.7 billion) special lending facility within the bloc's interbank consortium.

Putin said trade and investment among SCO countries was growing and Russia and China would propose a Eurasian economic partnership for all member states.

The US withdrawal, he said, "can further destabilise the situation" but Russia is in favour of the "unconditional implementation" of the pact.

Putin, however, voiced his support for Trump's summit with North Korean leader Kim Jong Un in Singapore on Tuesday.

For his part, Rouhani said the "US effort to impose its policies on others is an expanding danger".

Rouhani said the US was monitoring the global reaction to its withdrawal from the nuclear deal, and a weak response would encourage it to carry on acting unilaterally.

"This will have many harmful consequences for the global community," he said.

The Iranian president said his country was ready to cooperate with the SCO against terrorism, extremism and separatism.
Comments
G7 Summit Quebec CitySCO Meet 2018Donald Trump