Climate tipping points -- which are irrevocable over centuries or longer -- are thresholds past which large and rapid changes to the natural world may occur. 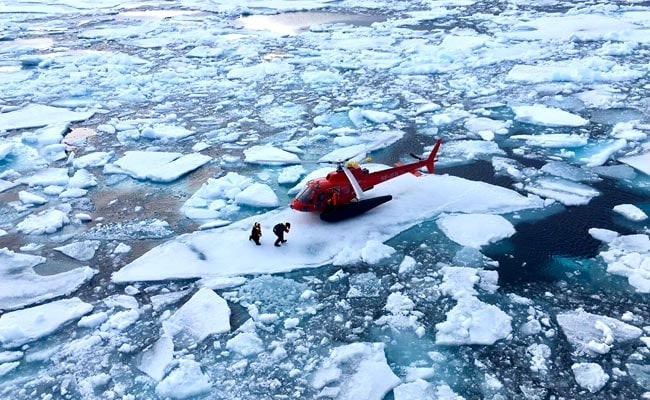 Scientists are divided on when or if most tipping points will be triggered. (File)

Abrupt disruptions to Earth's climate thousands of years ago that caused extreme sea-level rise and mass ice cap melting can serve as an early warning system for today's planetary tipping points, according to new research.

Climate tipping points -- which are irrevocable over centuries or longer -- are thresholds past which large and rapid changes to the natural world may occur.

They include looming catastrophes such as the melting of the ice sheets atop Greenland and West Antarctica, which contain enough frozen water to lift oceans more than a dozen metres (40 feet).

But they are notoriously hard to anticipate, given the relatively small or incremental changes in variables such as atmospheric carbon concentrations that trigger them.

In a review of past climate events published in the journal Nature Geoscience, an international team of scientists examined two major instabilities in the Earth system, caused by changes in ice, oceans, and rainfall patterns.

They looked at the conditions that led to the Bolling-Allerod warming event nearly 15,000 years ago, which saw surface air temperatures soar up to 14 degrees Celsius over Greenland.

The team also studied the end of the so-called African humid period around 6,000-5,000 years ago, which led to regional changes in ecosystems and pre-historic human societies.

They found that various past climate systems, such as ocean dynamics and rainfall patterns, tended to slow as they reached a tipping point, after which they failed to recover from perturbations.

"Earth's recent past shows us how abrupt changes in the Earth system triggered cascading impacts on ecosystems and human societies, as they struggled to adapt," said Tim Lenton, review co-author and director of the University of Exeter's Global Systems Institute.

"We face the risk of cascading tipping points again now -- but this time it is of our own making, and the impacts will be global," said Lenton.

"Faced with that risk, we could do with some early warning systems."

While current atmospheric CO2 levels of around 412 parts per million have some precedent -- at least 800,000 years ago -- the rate of CO2 accumulation does not.

Scientists are divided on when or if most tipping points will be triggered, but many believe effects such as ice-sheet melt is already "locked-in" due to carbon pollution.

Authors of the review, which was published online Thursday, said it showed evidence that the impacts of past abrupt changes to the Earth system combined to create planet-wide disruption.

Changes to ice levels and ocean currents, for example, at the start of the Bolling-Allerod warming lead to cascading impacts such as low ocean oxygen levels, vegetation cover, and atmospheric CO2 and methane levels.

"It sounds counterintuitive, but to foresee the future we may need to look into the past," said lead author Victor Brovkin from the Max Planck Institute for Meteorology.

"The chance to detect abrupt changes and tipping points -- where small changes lead to big impacts -- increases with the length of observations," he said.

"This is why analysis of abrupt changes and their cascades recorded in geological archives is of enormous importance."