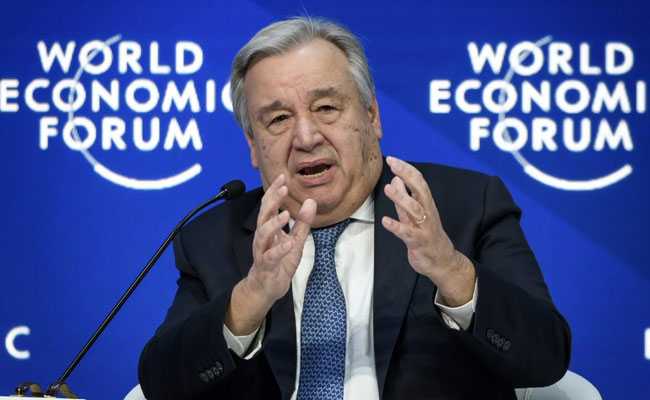 The annual overview is "a dismal litany of humanity's failure to tackle climate disruption", UN chief Antonio Guterres said. "The global energy system is broken and bringing us ever closer to climate catastrophe. We must end fossil fuel pollution and accelerate the renewable energy transition before we incinerate our only home."

The WMO said human activity was causing planetary-scale changes on land, in the ocean and in the atmosphere, with harmful and long-lasting ramifications for ecosystems.

The report confirmed that the past seven years were the top seven hottest years on record.

Back-to-back La Nina events at the start and end of 2021 had a cooling effect on global temperatures last year.

Even so, it was still one of the warmest years ever recorded, with the average global temperature in 2021 about 1.11 degrees Celsius above the pre-industrial level.

The 2015 Paris Agreement on climate change saw countries agree to cap global warming at "well below" 2C above average levels measured between 1850 and 1900 -- and 1.5C if possible.

"Our climate is changing before our eyes," said WMO chief Petteri Taalas.

"The heat trapped by human-induced greenhouse gases will warm the planet for many generations to come. Sea level rise, ocean heat and acidification will continue for hundreds of years unless means to remove carbon from the atmosphere are invented."

Four key indicators of climate change "build a consistent picture of a warming world that touches all parts of the Earth system", the report said.

Greenhouse gas concentrations reached a new global high in 2020, when the concentration of carbon dioxide (CO2) reached 413.2 parts per million (ppm) globally, or 149 percent of the pre-industrial level.

Global mean sea level reached a new record high in 2021, rising an average of 4.5 millimetres per year throughout 2013 to 2021, the report said.

GMSL rose by 2.1 mm per year between 1993 and 2002, with the increase between the two time periods "mostly due to the accelerated loss of ice mass from the ice sheets", it said.

Signs in the seas

It is expected that the upper 2,000 metres of the ocean will continue to warm in the future -- "a change which is irreversible on centennial to millennial timescales", said the WMO, adding that the warmth was penetrating to ever deeper levels.

The ocean absorbs around 23 percent of the annual emissions of human-caused CO2 into the atmosphere. While this slows the rise of atmospheric CO2 concentrations, CO2 reacts with seawater and leads to ocean acidification.

The UN's Intergovernmental Panel on Climate Change concluded with "very high confidence" that open ocean surface acidity is at the highest "for at least 26,000 years".

Meanwhile the report said the Antarctic ozone hole reached an "unusually deep and large" maximum area of 24.8 million square kilometres in 2021, driven by a strong and stable polar vortex.

Guterres proposed five actions to jump-start the transition to renewable energy "before it's too late".

"If we act together, the renewable energy transformation can be the peace project of the 21st century," Guterres said.