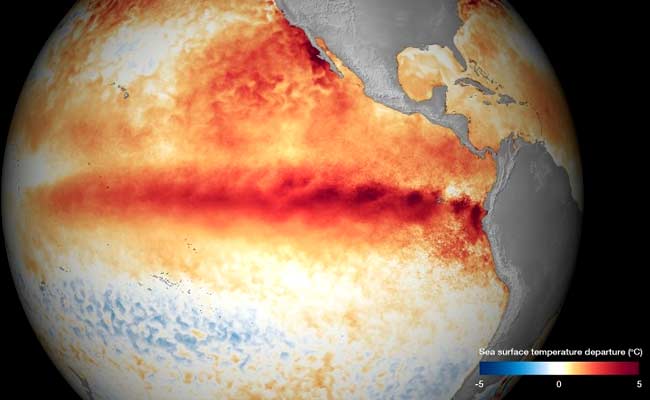 Monthly temperature records show that 2016 is likely to be the hottest on record. (Representational)

But other extreme weather events could not be blamed on the burning of fossil fuels which traps gas in the atmosphere and warms the planet, said the report called "Explaining Extreme Events from a Climate Perspective."

Those for which scientists found "no climate signal" included the extreme cold in the eastern US and Canada, the late arrival of Nigeria's spring rains and heavy daily precipitation in December over Chennai, India.

The report, regularly published in the Bulletin of the American Meteorological Society, does not cover all extreme weather events, but allows scientists to select and study certain ones of interest.

Scientists then use historical records and climate models to attempt to explain the extent of the impact of climate change in shaping them.

The latest report is based on 25 peer-reviewed research papers that examine episodes of extreme weather of 2015 over five continents and two oceans.

Some 116 scientists from 18 countries contributed to the analysis.

"The strongest evidence for a human influence was found for temperature-related events -- the increased intensity of numerous heat waves, diminished snowpack in the Cascades, record-low Arctic sea ice extent in March and the extraordinary extent and duration of Alaska wildfires," said the report.

Monthly temperature records show that 2016 is likely to be the hottest on record, marking the third such year in a row as the planet warms.

Scientists say some storms and other kinds of extreme weather are likely to get worse as the Earth heats up, glaciers and ice sheets melt and sea levels rise.

"As we get better at distinguishing the influence of climate change from natural variability, the local significance and impacts of this global phenomenon are becoming clearer."

Among the clearest signals of climate changes influence were the 2015 European heat waves.

"Modeling experiments indicate that human-induced climate change was a major factor in setting the conditions," for these heat waves, said the report.

Extreme winter sunshine in Britain over the past two years has "become more than 1.5 times more likely under the influence of climate change," it said.

A warming climate raised the risk of wildfires. In Alaska, 5.1 million acres (20,700 square kilometers) burned in 2015, the second-most since records began in 1940.

"Human-induced climate change may have increased the risk of a fire season of this severity by 34 percent to 60 percent" said the report.

Promoted
Listen to the latest songs, only on JioSaavn.com
In coastal Miami, flooding during high tides on otherwise sunny days have increased by more than 500 percent in the past two decades, a rise that is likely due to climate change.

One such flood in September last year was "symptomatic of such a trend in tidal floods that are becoming commonplace as sea levels rise."