Cleveland Officer In Tamir Rice Shooting 'Did Not Know Was Kid': Video 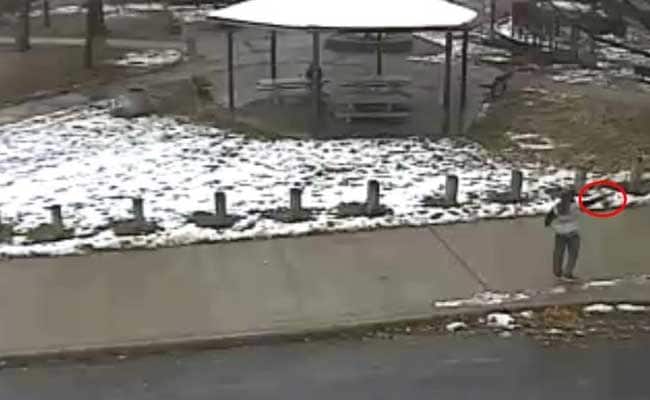 Tamir Rice, 12, is seen allegedly pointing a pellet gun at the Cudell Recreation Center in Cleveland

Cleveland: The partner of a Cleveland police officer who fatally shot 12-year-old Tamir Rice in 2014 said he "didn't know it was a kid" when he responded to an emergency call about an armed man at a park, according to video released on Tuesday. Cleveland Police Department officer Frank Garmback, in a video of a police interview following the shooting of the African-American child, became emotional several times.

"I didn't know it was a kid," Garmback said as he covered his face with his hands in the video released by the Rice family's attorney Subodh Chandra.

The shooting by a white officer of Rice as he was playing with a replica gun that fired pellets was one of a string of killings that fuelled protests against the use of deadly force by U.S. police, particularly against minorities.

Chandra released the video on Tuesday as part of the family's push to have both officers fired, calling them incompetent.

In 2015, a Cuyahoga County grand jury declined to charge Garmback or Timothy Loehmann, who fired the fatal shot on Nov. 22, 2014. Both officers now face administrative charges that could result in suspension or termination.

Loehmann and Garmback's attorney, Henry Hilow, questioned the release of the videos.

"It is suspicious and prejudicial to any kind of fair and unbiased hearing," Hilow said in a phone interview.

Both officers remain restricted to desk duty, but want to return to active patrol, Hilow said.

In March, a Cleveland police dispatcher was suspended eight days for failing to warn the officers a 911 caller had described the scene as probably a child with a fake gun.

In his video interview, Garmback described the scene after Rice was shot and his frustration at the slow response of the ambulance. "I can see this kid's eyes rolling in the back of his head. He is barely breathing and there is no rescue squad," he said.

In contrast, Loehmann showed little emotion during his interview, which ran twice as long as his partner's. He continually referred to Rice as "the male" or "the black male" while investigators repeatedly asked him to clarify the events of the shooting.

Promoted
Listen to the latest songs, only on JioSaavn.com
(Reporting by Kim Palmer in Cleveland, Editing by Ben Klayman and Andrew Hay)
© Thomson Reuters 2017