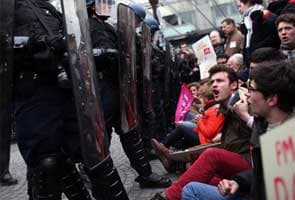 Paris: Paris police used tear gas and batons to fight crowds who pushed their way onto the landmark Champs-Elysees avenue and toward the presidential palace as part of a huge protest against a draft law allowing same-sex couples to marry and adopt children.

Hundreds of thousands of people - conservative activists, schoolchildren with their parents, retirees, priests - converged on the capital on Sunday in a last-ditch bid to stop the bill, many bused in from the French provinces.

The violence took protesters and police by surprise, and suggested that the anti-gay marriage protests have become outlets for anger and disappointment in the presidency of Francois Hollande's presidency.

The lower house of France's parliament approved the "marriage for everyone" bill last month with a large majority, and it's facing a vote in the Senate next month. Both houses are dominated by Hollande's Socialist Party and its allies.

Sustained protests led by opposition conservatives in this traditionally Catholic country have eroded support for the draft law in recent months, and organizers hope Sunday's march will swing the Senate debate against it.

The first few hours of the protest were peaceful. But as it was meant to be winding down, about 100 youths tried to push past police barricades onto the Champs-Elysees, a tree-lined avenue that cuts through central Paris and draws throngs of tourists daily. In an indication of the sensitivity of the issue, protesters had been barred from marching on the Champs.

Police officers wrangled with the youths, some with shaven heads and others wearing hoods or masks, and fired tear gas to force them back. Gaining momentum, more and more protesters took side streets to reach the avenue, blocking a key intersection - and some made it within 100 meters (yards) from the grounds of the president's Elysee Palace.

Police fired more tear gas, primarily at aggressive youths at the front of the crowd. Protesters of all ages were among those coughing and clutching their stinging eyes.

"Hollande, Resignation!" they chanted, before breaking into the French anthem, "La Marseillaise."

When Hollande took office in May, most voters supported the idea of gay marriage and few expected it to face much of a challenge. But disillusionment with the president's failure to stem rising unemployment or revive the economy - a much bigger concern for the French - have fuelled resentment at the "marriage for everyone" bill.

An official with the Paris police headquarters said two people were arrested and no injuries were reported in Sunday's clashes. The police official was not authorized to be publicly named in accordance with police policy.

Polls indicate a shrinking majority of French voters back gay marriage, which is legal in about a dozen mostly European nations and some U.S. states. But polls show French voters are less enthusiastic about adoption by same-sex couples.

Promoted
Listen to the latest songs, only on JioSaavn.com
Frigide Barjot, the stage name of an activist who has led protests against the bill, insisted the anti-gay marriage movement wasn't a lost cause, declaring: "It's the second round, sir. It's not the last battle."