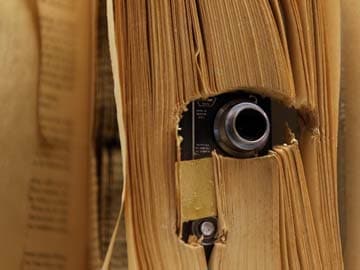 A small photo camera placed in a book and used by the U.S. Central Intelligence Agency (CIA), is displayed at the 'Top Secret' Spy Museum in Oberhausen, July 10, 2013.

Washington: The Central Intelligence Agency was involved in a spying operation against Germany that led to the alleged recruitment of a German intelligence official and has prompted renewed outrage in Berlin, two U.S. officials familiar with the matter said on Monday.

CIA Director John Brennan has asked to brief key members of the U.S. Congress on the matter, which threatens a new rupture between Washington and a close European ally, one of the officials said.

It was unclear if and when Brennan's briefing to U.S. lawmakers would take place. The CIA declined any comment on the matter.

The office of Germany's Federal Prosecutor, based in the western city of Karlsruhe, late last week issued a statement saying that a 31-year old man had been arrested on suspicion of being a foreign spy, and that investigations were continuing. The statement offered no further details.

German politicians have said that the suspect, an employee of the country's foreign intelligence service, admitted passing to an American contact details concerning a German parliamentary committee's investigation of alleged U.S. eavesdropping disclosed by Edward Snowden, a former contractor for the U.S. National Security Agency.

The U.S. officials who confirmed the CIA's role spoke on condition of anonymity, and offered no further details.

"The relationship that the United States has with Germany is incredibly important. This is a very close partnership that we have on a range of security issues, including some intelligence issues," Earnest said. "All of those things are high priorities not just to this administration, but to this country. So we're going to work with the Germans to resolve this situation appropriately."

"If the reports are correct it would be a serious case," Merkel told a news conference in Beijing, standing next to Chinese Premier Li Keqiang.

German media reported that the suspected spy, who has not been named, had first been detained on suspicion of contacting Russian intelligence agents, but then admitted he had worked with the Americans. The suspect worked for Germany's Federal Intelligence Service, known by the German initials BND.

Promoted
Listen to the latest songs, only on JioSaavn.com
While historically close, U.S. intelligence ties to Germany became strained over the last year in the wake of the Snowden revelations.