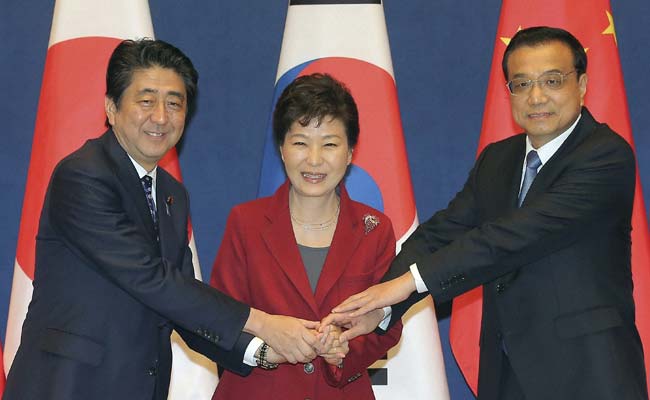 Seoul: Chinese Premier Li Keqiang met Japanese Prime Minister Shinzo Abe in Seoul today and called for concerted efforts to maintain and strengthen the positive momentum in the rapprochement between their countries.

Citing the recent rough patch of China-Japan interaction, Mr Li said the two countries know the causes and should summarise the past and draw lessons from it, Xinhua news agency reported.

They need to keep a firm grasp on the development of their strategic relationship of mutual benefit, he added.

The meeting, held at the request of the Japanese side, came after the two leaders joined South Korean President Park Geun-hye at the first China-Japan-South Korea trilateral summit after a three and a half years' hiatus.

China-Japan relations have witnessed gradual recovery since the two countries reached a four-point agreement in November 2014, which paved the way for an ice-breaking meeting between Chinese President Xi Jinping and Mr Abe days later.

Now bilateral security dialogue and exchanges between the two countries' governments, legislatures and political parties have resumed, and high-level contact has also been picking up steam.