'Qian Weichang', the ship of the People's Liberation Army Navy was ceremonially welcomed by the Sri Lankan Navy. 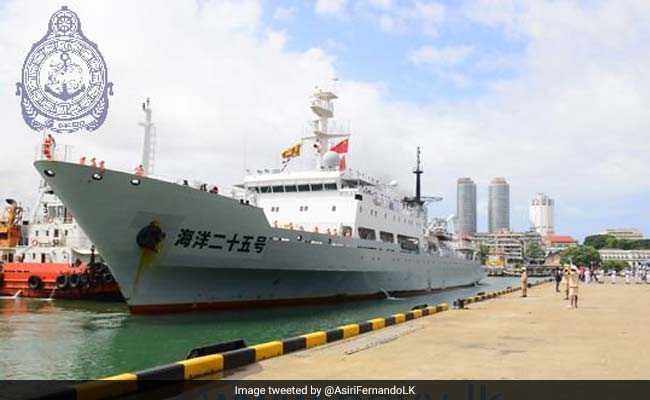 A hydrographic survey ship of the Chinese Navy has arrived in Colombo on a four-day visit.

A hydrographic survey ship of the Chinese Navy has arrived at the port of Colombo on a four-day goodwill visit, the Sri Lankan Navy said.

'Qian Weichang', the ship of the People's Liberation Army Navy (PLAN), was ceremonially welcomed by the Sri Lankan Navy in accordance with the force's traditions upon its arrival yesterday.

During the ship's stay in the country, the crew will participate in events organised by the Lankan Navy as well as visit places of tourist attraction in the island nation.

The 129-metre-long and 17-metre-wide vessel which has a displacement of 4,900 tonnes is manned by 158 officers and sailors.

The arrival of the Chinese naval ship assumes significance in the wake of the communist giant recently gaining control of the Hambantota port in Sri Lanka, raising concerns that China could use the harbour for military purposes.

Several media reports suggested that the deepwater port, which is near a main shipping route between Asia and Europe, is likely to play a major role in China's Belt and Road Initiative (BRI).

The BRI, also known as the Silk Road Economic Belt, is a development strategy proposed by the Chinese government which focuses on connectivity and cooperation between Eurasian countries.

The Chinese government calls the initiative "a bid to enhance regional connectivity and embrace a brighter future". However, other nations see it as a push by China to take a larger role in global affairs with a China-centred trading network.