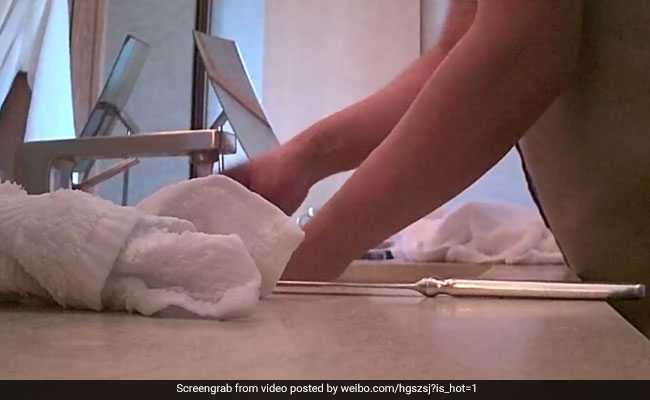 The video shows hotel staff using a single cloth to clean toilets as well as water cups and basins.

China's tourism regulator has launched an investigation into poor hygiene at a slew of five-star hotels, including global chains such as the Ritz Carlton and Shangri-La, after an undercover expose went viral and prompted a public outcry.

China's Ministry of Culture and Tourism said in a statement it was concerned by the reports and had asked authorities in five provinces to investigate the issue, which has already prompted a flurry of apologies from big-name hotel chains.

Huazong, who has 322,000 followers on China's Twitter-like Weibo, said he recorded the videos during stays at deluxe hotels over the past few years. He said he was disheartened to realise it was common for staff to use dirty towels to clean cups.

His revelations drew wide attention and caused a nation-wide public outcry. Hotels including the Park Hyatt in Beijing, the Shangri-La in Fuzhou, and the Four Seasons in Shanghai issued apologies and vowed to improve service quality.

The Mandarin Oriental hotel in the commercial hub of Shanghai vowed "it would not tolerate the inappropriate cleaning behavior in guest rooms shown in the video".

The Shangri-La said it was taking steps to ensure hygiene standards. The Four Seasons in Shanghai said it would improve internal training.

The expose also led to heated discussion online as some argued the cleaning staff were not getting paid much for working in some of the most expensive hotels in the world.

"Luckily I cannot afford to stay in any of these hotels," one commenter said in an online post responding to the video.

What Does Vladimir Putin's Partial Mobilisation Mean For Russian Troops