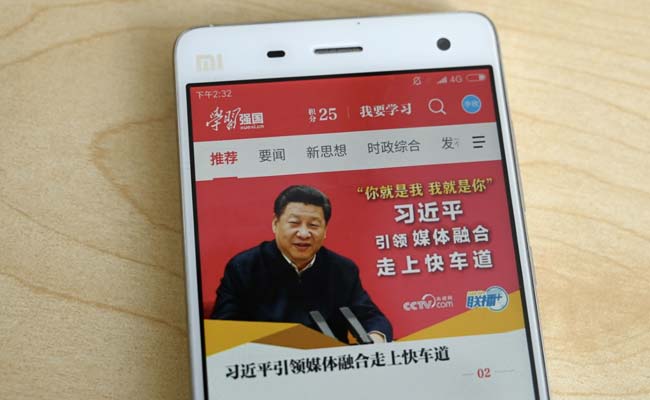 A propaganda app that puts China's powerful President Xi Jinping in anyone's pockets has become a hit in the country — with a helpful nudge from Communist Party officials.

Millions have downloaded the app, which tracks the amount of time users spend browsing inspirational quotes from the Chinese leader and watching short videos of his speeches and travels.

People are rewarded with points for sharing articles or answering quizzes on Communist heroes, and one day they may be able to redeem their scores for gifts such as pastries and tablets.

But it's not all fun and games.

Some people say they felt pressured to download it, others hope it can help their careers, and local government officials have been heavily promoting it.

The app's name — "Xuexi Qiangguo" or "Study to Make China strong" — is a pun as the Chinese word for studying, Xuexi, can also be read as "Study Xi".

It has been downloaded nearly 44 million times on Apple and Android devices since its launch in January, according to Beijing-based statistics provider Qimai Technology.

"It's a perfect example of propaganda in the Xi era... that appeals to China's large online population," said Manya Koetse, who tracks social trends in China as editor of What's on Weibo.

"The party will go wherever the people are."

The party's propaganda arm has become tech-savvy in its battle for the country's hearts and minds, delivering its message through rap songs, comics and stickers on popular messaging app WeChat.

Last May, it launched another free app called "Learn about China", featuring Xi's first book along with academic papers analysing his views.

Users must register with their mobile phone number and name their employer.

An employee at a state media company said she posts her scores on her WeChat social media account because she is in line for a promotion and hopes her bosses will see she has "the right mindset".

One state worker said she felt under pressure to use the app, although it was not officially mandatory for civil servants.

A doctor at a state hospital in Beijing, who only gave her last name Xu, said she had her parents use the app to take quizzes and read articles on her behalf.

"Our scores are valid for two years and I am not sure whether they'll be useful (for my career) later," she added.

Li Xin, who works for a state-run oil company, said it promotes a "Xi cult".

Dozens of provincial and county governments across the country have held workshops to promote the app in recent weeks, local media reports showed.

Even China's e-commerce giant Alibaba, whose founder Jack Ma is a Communist Party member, is making a contribution: job ads on the company's website shows it has been hiring software developers to work on the app.

While "Study Xi" became the top app in Apple's China app store last month, it only managed to get an average rating of 2.4 stars out of five. Ratings and reviews for the app were disabled last week.

But analytics firm App Annie has preserved nearly 500 reviews — many with a hint of sarcasm — submitted by Apple users in previous weeks.

"It's totally voluntary," quipped one reviewer who gave the app one star.

"My employer wants us to learn enough to get 35 credits every day... So we have no choice but to carry our children with one hand and our phones with the other and chase points with no life," wrote another.