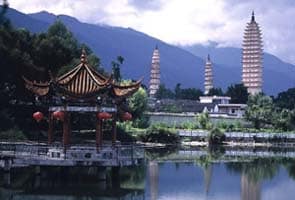 Beijing: China's famed Shaolin Temple has set up over 40 companies overseas as it hopes to spread Buddhist-inspired martial arts around the globe, state press reported today.

But the announcement of a vast business plan to send the temple's famed warrior monks abroad has been met with criticism over the commercialisation of Buddhism, the Global Times said.

"We currently operate over 40 companies in cities across the world, such as Berlin and London," the paper quoted Shi Yongxin, the temple's abbot, as saying at a Beijing culture forum.

"The Shaolin Temple is also participating in the operation of some other companies related to the same industry," he said, adding that the companies have bought land and property overseas.

Shi, the first Chinese monk to earn a master's degree in business administration, denied the businesses were profit-motivated, insisting that the temple was fulfilling an overseas infatuation with "Shaolin culture", it said.

The temple, which was established in 495 AD, is known as the birthplace of Zen Buddhism and Chinese kung fu.

Shaolin warrior monks have held legendary status for centuries throughout Asia, while over the last 50 years films and television have spread their reputation worldwide.

The temple has nearly 130 martial arts clubs in the United States alone, while Shaolin monks are already capable of teaching in English, German and Spanish, he said.

Shi, known as the "CEO of Shaolin" since taking over the temple a decade ago, has developed commercial ventures such as kung fu shows, film production and online merchandise sales.

Last year he denied the temple planned to participate in an initial public offering with a Hong Kong travel company, while a Beijing court turned down an application to put a Shaolin trademark on consumer goods like instant noodles.

Shi's business efforts have been widely criticised as a naked attempt to commercialise Buddhism, the report said.

"To many people, a temple is a reclusive place outside the bustles of the material world," but "when a monk like Shi travels frequently by plane to promote his businesses, secular society cannot keep up," the paper said in an editorial.

"While spreading ideas has been the traditional theme of most religions, Shaolin's ventures abroad also help China spread its traditional culture and thinking, and gain more understanding through a civil channel."
Comments
Shaolin TempleBuddhist-inspired martial arts